Bosnia deported a Tunisian man to his homeland Tuesday after he was deemed a national security threat, and banned him from returning to the Balkan country for five years, the security ministry said.

Ammar al-Hanchi had been held in a local immigration centre since April 2009.

He had appealled his case to the European Court of Human Rights, but the court rejected Hanchi’s motion in November.

The Strasbourg-based tribunal ruled there was no real risk of him being exposed to inhuman treatment or torture in Tunisia, a ministry statement said.

Seventeen people are currently held in Bosnia’s immigration centre, among them two who are considered national security risks.

Bosnia has deported several citizens from Islamic countries, mostly former fighters who arrived here during the country’s 1990s war to fight alongside the Muslim-led army. 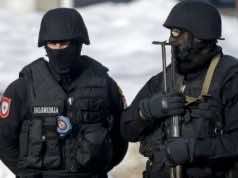 Moroccan National Stabbed to Death in Fight in Bosnia