I took a taxi to Agadir, 345 miles (555 kilometers) South of Rabat, this morning. It was hot inside the cab and the pressure from the passengers crowded inside was enough to make a nuisance of ourselves let alone the rough road. Being unable to move my body freely or do anything like reading that would save me the long miles, I kept my eyes fixed on the weird gestures that the old driver was doing with his hands whenever we intersected with a vehicle going the opposite direction. To be precise, the taxi driver started this body language immediately after we passed by some police officers. One of them was looking through a binoculars-like device, which had to have been the speed radar. At last, I came to understand that the old cabbie was warning oncoming drivers of the existence of the police monitoring for speeding. Then I questioned the utility of such technological devices on the road while there are such highly sophisticated codes commonly understood between drivers.

In an attempt to force road users to respect traffic signals, and, hopefully, decrease the alarming amount of road accidents taking place on Moroccan roads, authorities have implemented these technological devices largely on the main roads in order to arrest drivers who violate speed limits defined by traffic signals. Sadly, drivers in turn have developed their means of communication along the road to escape being caught by such advanced techniques. The more sophisticated tools that authorities use to control and manage road traffic, the more cunning tricks drivers invent to circumvent technology and the law. So, what should be done?

In Morocco, people are feed up by the deadly road accidents recurring on a daily basis. Because of some misleading media outlets, people are convinced that bus and taxi drivers are the culprits of the deaths on Morocco roads. However, taxi and bus drivers, regardless the mortal speed they drive at, remain skillful and trustworthy. According to Moroccan road accidents statistics, taxi and bus drivers cause less accidents compared with other users of the roads; still, this is not to say that some of them are not free of blame. My point, however, is to stop with some quirky signals that drivers use between one another about the presence of police, and hopefully present an alternative approach to put an end to this cat and mouse game.

Some drivers have excelled in making up new tricks by which they can easily deceive police officers on the road and their machines. When the ministry of transport made it obligatory for buses and big trucks to use a disc on their counters to record the maximum speed and time spent between cities, some drivers who were not satisfied with these measures invented a simple but effective trick that keeps the needle of the counter always swinging below the desired speed. Thanks to this mischievous trick, drivers run at the desired speed, but they have never been caught for driving above the speed limit.

One would but salute warmly this solidarity between drivers that share probably nothing except that name and the long tiring road. If only such high respect was shown to the traffic signals that are erected along the roads. What we need in Morocco to decrease the daily mortality rate on roads is not, I guess, more punitive measures or other advanced devices to control the roads, but more focus on education. A well-educated driver is a person who holds respect for traffic signals and for the other users of the road. A well behaved chauffeur would not have recourse to any means to deceive the police, because he or she is convinced that their and other people’s safety lies in respecting the regulations of the road.

For a moment, a gnawing question popped up and drifted into my flow of thoughts: why was such an old man is still behind the wheel? But, I won myself over that there was no need to delve into this labyrinth and concentrate on those funny finger movements that definitely would have saved nines. In other parts of the world, pointing one’s index or middle finger before someone may be offensive, but in Morocco it is a sign that the radar gun of police officers are just few miles away. For you, I say have a safe trip! 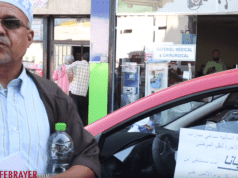