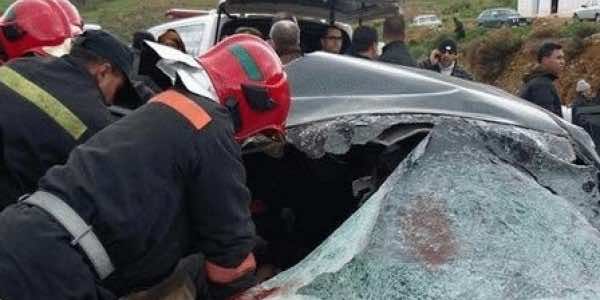 Meknes – One of the very famous jokes in Morocco is that “the Moroccan gets sick, and cannot sleep if he does not hear about at least one car accident per-day.” A superficial analysis of this joke can stimulate hilarious laughter, but if one gets deeper, he can quickly burst into tears, and realize the bitter situation of Morocco. This joke confirms two dangerous facts. First, the frequency of car accidents and the number of victims is extraordinarily high in Morocco. More importantly, Moroccans have become accustomed to hearing about people passing away on a daily basis. In Morocco, hearing about a car accident became so trivial that it is not worth being discussed when watching the news. But is it a trivial thing?

The memory of the horrible car-accident labeled by journals “alhawz tragedy” is still fresh in our minds; we just cannot easily forget the image of the 42 human bodies put on the road side, in addition to the 24 injured. Soon after the accident, the ordinary exchange of blame between the government and society started. The government claims that car-accidents are caused by human factor. Society put forth the idea that the blame is to be put on the government because our roads are like the ocean, the one who gets in is lost and the one who gets out of them is a newly born man. But as the English proverb says, “the bad workman always blames his tools,” because, indeed, the responsibility is shared.

According to the latest report of the Ministry of Equipment and Transport, during the first eight months of 2012, there were 44,902 car accidents, taking the life of 10 people and 140 injured for each single day. Imagine how many children become orphans, how many women become widows, and how many parents receive a call telling them that their beloved son or daughter has passed away, each day. Ironically, these numbers give Morocco an advanced rank among countries suffering car accidents, a rank that we couldn’t reach in other domains as education.  So for how much longer is the wound of car-accidents going to bleed the lives of Moroccan citizens?

In an attempt to define who to blame for car-accidents, one should be very cautious. Some Moroccans assert that it is the government’s responsibility, and they defend this idea by pointing out the condition of our roads. But the question is if we had perfect roads does this mean that car-accidents would vanish? Of course not, because some drivers are so reckless in how they drive, and do not realize the responsibility of being a car driver. Some drivers, to mention just a few, push their cars to the limits in public places just to show off. Others are so confident that they drive while they are drunk. A third group, however, never check their car’s mechanical condition. These are fatal mistakes that in some cases take the life of individuals.

With that being said, it is time to change our focus, and check the responsibility of the government. It would be astonishing to know that the majority of bus drivers (except those working with famous companies such as CTM) are only workers and not employers. That is to say, they have no legal framework that protects their rights, no insurance, and have to fight to keep their jobs. That’s why they drive so fast to arrive on time and satisfy “the boss”, and take extra people (more than the legal number), because he can keep the price they pay for themselves, not to mention the number of hours they have to work.

So how can we expect someone whose rights are not protected to abide by the law? Additionally, our road conditions are far away from appropriate. Unfortunately, I found no study dealing with this issue. But one doesn’t need to put his hand on the fire to discover that it is hot; a simple look at some parts of our roads and bridges gives you the impression that they are the remnants of the sixties and the seventies. Moreover, the government never bothers itself by removing from the roads some buses, cars and trucks that are so old and do not respect the conditions of safety, leaving the Moroccan citizen with no choice but to risk his life when traveling.

I must say that the issue of car-accidents in Morocco is very complex, and one single article can never cover it comprehensively. However, this is an attempt to shed light on a very serious issue that costs us the lives of our loved ones. It is our way to say that we are fed up with turning on the TV everyday to hear about new people who started their travel, but never arrived to their destination. It is a demand for help to recover from travel-phobia, and the idea that the person who is about to travel, may never return.