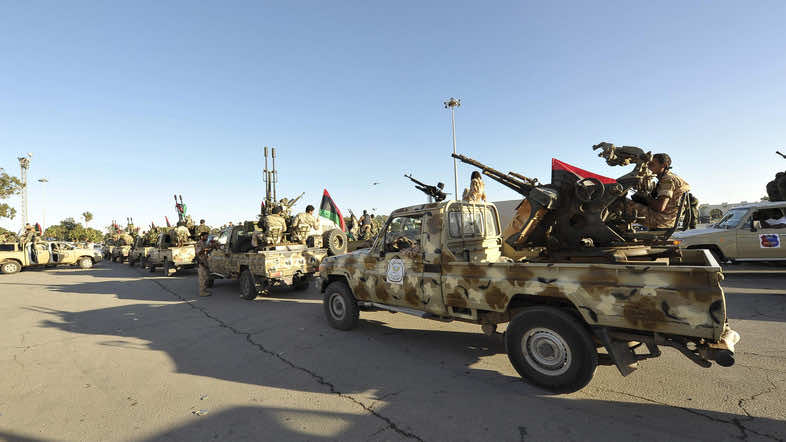 Hundreds of federalism backers massed on Friday in the Libyan city of Benghazi, cradle of the 2011 uprising that toppled veteran dictator Moamer Kadhafi, insisting on autonomy for the oil-rich east.

More than 1,000 demonstrators demanding greater autonomy for the Cyrenaica region gathered outside the Tibesti Hotel after weekly Muslim prayers, an AFP journalist at the scene said.

“Ignoring our demands for federalism has dire consequences on the future of Libya,” read one banner.

Members of the movement would like to see Benghazi become the economic capital of Libya, with key institutions such as the central bank and the ministries of oil and finance based in the city.

The demonstrators also circulated a statement calling for a return to the 1951 constitution and expressing support for the government of Prime Minister Ali Zeidan that was approved on Wednesday by the national assembly.

“We declare our full support for the elected government, which won the confidence of the General National Congress, in order to draft a constitution on the basis of the legitimate constitution of 1951,” read their statement.

Libya was a federal union from 1951 to 1963 under King Idris I, which divided the country into three administrative states — Cyrenaica, Tripolitania and Fezzan.

Cyrenaica, which runs from the Mediterranean coast south to Chad, comprises roughly half of the country’s territory and holds about three-quarters of Libya’s vast oil reserves.

Federalism backers feel the region was neglected by Kadhafi’s regime.

The federalist camp emerged in March but was shunned as a secessionist effort by the interim authorities and the public largely ignored its calls to boycott July elections for a national assembly, the first after a 42-year dictatorship.

The rally in the east came two days after the national assembly approved a cabinet line-up presented by Prime Minister Ali Zeidan, despite pressure from protesters unhappy at ministers they associate with the Kadhafi era.

Meanwhile, in Tripoli, ex-rebel fighters angry over the new government line-up lifted their siege on the national assembly building on Friday after occupying it for more than 24 hours.