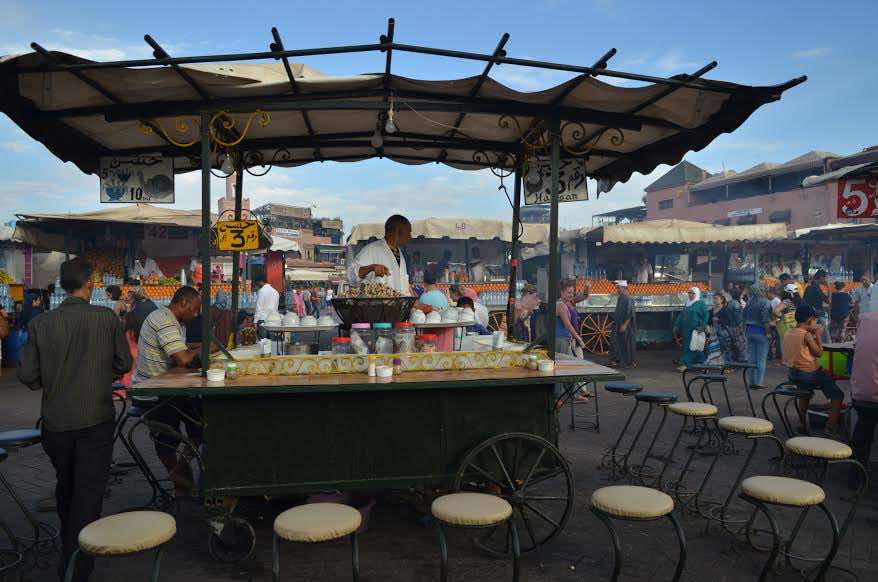 In 2008, Paula Wolfert’s book, Couscous and Other Good Food from Morocco, won the Cookbook Hall Of Fame award, twenty-five years after its publication. At the time, Moroccan cuisine would probably have seemed pretty exotic. These days fancy food trucks and posh catering carts may be blocking the highways in Europe and the US, but Morocco’s biggest street food heaven hasn’t moved in a thousand years.

Jmaa el Fna, The Place of the Dead, The Mosque at the End of the World, North Africa’s most vibrant and exotic square, the ancient heart of Marrakech, where snake charmers, storytellers and acrobats entertain the passing crowds. By day the bustle of henna artists, potion sellers, fresh orange juice vendors and red-robed water sellers; by night the curling smoke of a hundred barbeques spirals over the largest open-air restaurant in the world.

When dusk falls, handcarts are wheeled into Jmaa el Fna and unfolded to reveal portable grills, tables, benches, pots and pans. While the mounds of food are prepared young men in long white coats work the crowds trying to convince you that the succulent dishes served at their stall are the absolutely top-notch best; “Deliah Smith created our menu”, “All our fish comes fresh from Sainsbury’s”. And Sainsbury’s would probably be proud of the fish the stalls served, dipped in flour seasoned with salt and saffron before being deep-fried in bubbling oil until crisp and golden.

There are stalls to fit every taste and pocket; a bowl of harira, a traditional rich tomato and lentil soup with beef or chicken, seasoned with ginger, pepper, and cinnamon, or b’sarra, white bean soup with olive oil and garlic; add a sandwich served in a khobz, a small, round flat loaf with the top nipped off to form a pocket, filled with freshly deep-fried slices of liver dribbled with a green chilli sauce, or a hand-full of merguez, thin spicy sausages, and you will be set up for a stroll around the souks. (Keep an eye open for the really esoteric mixture of merguez, hard-boiled egg and tuna fish.)

Kebabs shops appear on almost every street corner around the globe these days, but in Marrakech vendors snub the effete pressed meat served elsewhere in favour of slices of real lamb, glistening with dribbling fat, sprinkled with cumin and salt as the cook hands it over to you wrapped in a paper cone. Chicken with preserved lemons, delicately spiced with kasbour (fresh green coriander) and served with piquant olives; brochettes of lamb and liver, seasoned with red pepper and cumin, carefully grilled over charcoal, which spits and smokes as the luscious fats fall on to it; beef or lamb tajines, cooked with raisins, prunes and almonds, have their conical tops whisked off by the waiters, just as the lids of elegant silver salvers would be at the Savoy. (Although you may want to leave the tajine of sheep’s or calf’s feet and the sliced camel’s head to the locals to enjoy, and it would take a certain amount of culinary courage to sample a cooked sheep’s head or bowl of sheep’s testicles – cooked, of course.)

On the west side of the square, a row of chefs steam mounds of snails in battered enamel bowls. The menu is simple, snails or snails, but as the little gastropods served in a tantalising broth are a gastronomic institution in Morocco, it isn’t always easy to get a seat at these stalls. Apparently wonderful for the digestion, locals drain the broth after having their fill of the snails. (They also often carry a safety pin to wheedle the little devils out, but a toothpick is usually provided.)

Vegetarians might not savour their best gastronomic experience, but it can delicious. Hard-boiled eggs are chopped and mashed with potatoes, with the inevitable sprinkle of cumin, (served alongside salt and pepper on every stall). Bright vegetable salads, glistening piles of savoury chick peas spiked with fresh-ground black pepper or bowls of lentil stew cooked with finely chopped onion and garlic; fried aubergine with a hot green pepper served alongside a pile of fresh cut and fried potatoes, all washed down with a glaringly orange Fanta.

Young boys man-handle small handcarts or struggle with large wooden trays laden with glistening sweetmeats through the densely packed crowds. Delectable as the pastries may look, aren’t always that sweet. If your taste is for fruit for desert, try, carmose, prickly pear, and the vendor will carefully remove the skin for you.

For a simple wandering snack, strings of sfenj donuts are held together by a strip of leaf to make carrying easier. They are delicious with a coffee, and come either sweet (with egg beaten into the batter) or savoury. Also useful for a back-up snack on long journeys.

If you haven’t washed your meal down with a drink at the stall, a glass of fresh orange juice will be squeezed before your eyes at one of the many carts around the edge of the square. You might also find raisin, pistachio and pomegranate juice, which have a mysterious flavour of their own. The Technicolor yogurts sold in big glasses look more off-putting than delectable, but raib, a home-made yoghurt with a milkshake consistency, slides down the throat deliciously.

The beautiful chaos of the food stalls is entertainment in its own right, but when you have eaten your fill there is still the raucous street entertainment of Jmaa el Fna to keep you from your bed.