Moroccan Foreign Minister, Saad Eddine Otmani renewed on Saturday in Cairo his call on the international community to act swiftly in order to stop the aggression carried out by the Israeli forces against the unarmed civilians in the Gaza Strip.

During his speech during the Arab League Foreign Minister’s emergency meeting in Cairo, which was broadcasted live on the BBC Arabic, he condemned the attacks being perpetrated by the “Zionist entity” against Gaza, and urged the international community to take concrete steps in order to put an end to the escalation of the crisis.

Morocco had strongly condemned the Israeli aggression against the Gaza Strip and called on the UN Security Council to put an end to it “in the shortest possible time and without conditions.”

In a speech at a Security Council emergency meeting held Wednesday, Moroccan Ambassador to the United Nations, Mohamed Loulichki said that this new aggression “is all the more reprehensible as it could last longer and spread to other parts of the Occupied Palestinian Territory.”

Ambassador Loulichki stressed, in this meeting held at the request of the Kingdom, “the dangerous implications of this new aggression in terms of destruction and targeted assassinations, led by the Israeli occupation forces in a region already rocked by other crises and tensions which could rush it into chaos.”

Mr. Loulichki said that “this new strategy distracts the international community from the strategic objective of a speedy resumption of negotiations leading to a just and lasting peace in the Middle East.”

Morocco called for an urgent meeting to discuss the situation in Gaza and was the first member of the Security Council to speak to “strongly condemn the Israeli aggression and to ask the Council to end it in the shortest possible time and without conditions.” 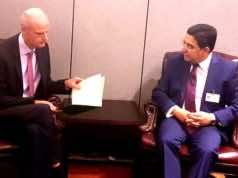