UN Secretary General Ban Ki-moon said Wednesday there were “many details to work out” before an agreement can be reached to end the Gaza conflict, as he called for an immediate ceasefire.

“We all know there are many details to work out but while that happens, civilians continue to die and cities continue to be targeted. And that’s why we need a ceasefire right now, immediately,” he told reporters in Cairo.

Ban was speaking after talks with Egyptian President Mohamed Morsi, who is playing a key role in mediating a ceasefire agreement between Israel and Hamas in the Gaza Strip.

“I want to add my support, voice and weight to President Morsi’s efforts to achieve a ceasefire in Gaza,” Ban told reporters after the talks.

He said that Wednesday’s attack on a bus in Tel Aviv that injured 17 people “is clearly designed to test their resolve” and made it all the “more urgent to reach a ceasefire.”

“The recent crisis proves again that the status quo is unsustainable,” he said before leaving for Jordan.

Meanwhile, a press statement by Clinton and Amr was delayed after talks between the two were extended.

Morsi and Hamas officials had said a ceasefire was expected on Tuesday, but intensive meetings failed yield a truce agreement.

“Talks are still ongoing and there are developments,” presidential spokesman Yasser Ali told reporters without elaborating.

Clinton and Ban have been shuttling between Egypt, Israel and the West Bank in a bid to bolster efforts at sealing a ceasefire deal.

“Hamas is now waiting to see what message the Egyptian intelligence officials will have after Morsi’s meeting with Clinton,” a source close to the talks told AFP earlier on Wednesday.

The US top diplomat arrived earlier from Israel where she held a second round of talks on Wednesday with Prime Minister Benjamin Netanyahu after travelling to the West Bank city of Ramallah for a meeting with Palestinian leader Mahmud Abbas.

In their talks, Clinton thanked Abbas for encouraging a restoration of calm and expressed “heartfelt concern for innocent lives lost” on both sides, State Department spokeswoman Victoria Nuland said.

“The secretary indicated that we were working to support ongoing efforts to defuse the crisis, especially Egyptian-Israeli conversations,” Nuland said in a statement issued in Washington.

Israel’s offensive, launched on November 14 with the targeted killing of a Hamas military chief, has killed at least 147 Palestinians, while five Israelis, including a soldier, have died in rocket attacks.

A senior Hamas official told AFP in Cairo that a key sticking point in the truce talks was the timing of when Israel would begin easing its six-year blockade of Gaza.

Netanyahu had told Clinton on Tuesday night that he was ready to agree to a “long-term solution” as long as the rocket attacks from Gaza stopped. 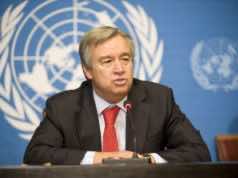