The 1.8 million-dirham center was built by the health ministry and a Moroccan benefactor, and equipped by the Lalla Salma Association to Fight Cancer.

It has two waiting rooms, three consultation rooms for the screening and diagnosis of breast cancer, three for cervical cancer, a colposcopy room, a mammography and ultrasound room, a pharmacy and two offices.

The capacity of the center can reach up to 6,000 consultations per year for screening and early diagnosis of cervical cancer.

The ALSLC has already built and equipped six such centers in the provinces of Meknes, Errachidia, Casablanca El Fida, Skhirat-Temara, Rabat and Sefrou.

The early detection of breast and cervical cancers program has trained 580 general practitioners, 930 nurses, 55 gynecologists and 100 paramedical staff across the country.

For the implementation of the program in the province of Kenitra, it is planned to train about 150 health professionals. 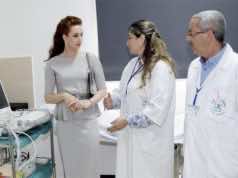