Some sixty two leading football players have signed a letter protesting UEFA’s decision to stage the European Under-21 Championship in Israel.

The football players claim that Israel hosting the tournament will be “seen as a reward for actions that are contrary to sporting values.”

The Ivorian Eden Hazard (Chelsea) and Bilge Didier Drogba (Shanghai Shenhua) are among the sixty-two professional football players who signed the letter of protest to UEFA.

Organized by UEFA every two years, the Championship of European Football hopes is a football competition that brings together the best national teams in Europe for players under 21 years.

The letter reads: “We, European football players, express our solidarity with the people of Gaza who has lived too long under siege and whose most basic human rights are denied: Dignity and freedom.”

The letter added “We have learned with dismay that on 10 November 2012, the Israeli army bombarded a sport’s court in Gaza, causing the death of children playing football,” confirming that “It is unacceptable that children are killed while playing football.”

The world reacted mournfully to the image of the thirteen years old Palestinian little boy who was killed while playing football with the shirt of Mesut Ozil during the recent Israeli raid on Gaza.

Real Madrid’s football player Mesut Ozil was touched by this”inhumane act and wrote on his twitter: “This little kid died while playing football with my shirt on. R.I.P to all the innocent victims, I’m praying for you. #FreeGaza #FreePalestine 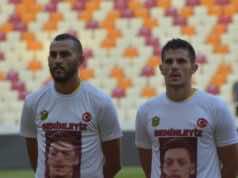 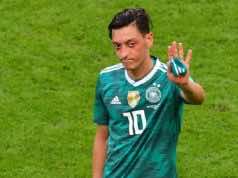 Mesut Ozil Quits Playing for Germany over ‘Racism and Disrespect’