The Morocco-US business conference due on Tuesday at the State Department in Washington, aims to “deepen, strengthen and further boost the trade and economic partnership between the two countries” Delegate Foreign Minister, Youssef Amrani.

This is a first step in the implementation of the strategic vision of HM King Mohammed VI, which has notably resulted in the launch, past September 13, of a strategic dialogue between Morocco and the United States.

Amrani said the north African country aims through this meeting to deepen the “exceptional” secular partnership in accordance with the guidelines laid down by the monarch, adding that the objective is to instill a stronger impetus to trade between the two countries, establish a more investment-friendly framework to U.S. companies, and enable both parties to exploit all the opportunities the geographical and strategic position of the north African country offers as a platform for production and export to markets in the region.

“The presence in Washington of a large delegation of businessmen and women, led by Meriem-Chekroun Bensalah, is a clear signal of the determination of the Moroccan private sector to strengthen economic relations with the US, the official said.

He stressed that Morocco, whose economy has shown a high degree of resilience to economic and financial turmoil, has proved its ability to effectively implement the political and economic reforms necessary to maintain a job-creating growth and one that provides social and political stability.

The Conference will focus on the first four areas identified by the two parties, namely the aerospace, automotive, agriculture and energy, he said. 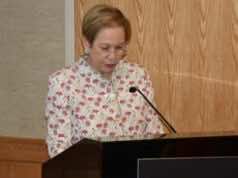 Morocco’s Ambassador to US Urges Solidarity Against Regional Challenges