The Moroccan-American business development conference opened Tuesday in Washington, with the participation of a large Moroccan delegation.

This meeting, which aims to promote trade and economic exchanges between Morocco and the United States, is marked by the participation of notably Minister of Agriculture and Fisheries, Aziz Akhannouch, Minister-delegate for Foreign Affairs, Youssef Amrani, as well as a delegation of Moroccan businessmen and businesswomen led by Meriem-Cheqroun Bensalah, President of the General Confederation of Moroccan Businesses (CGEM).

This meeting will discuss ways to increase bilateral trade and enhance business development in sectors such as aerospace, agriculture, automotive, and renewable energy and infrastructure.

The U.S.-Morocco Free Trade Agreement, implemented in 2006, eliminated tariffs on 95 percent of traded goods and has bolstered trade and investment between the two countries, resulting in two-way trade valued at $3.79 billion in 2011.

Currently, there are more than 120 American businesses operating in Morocco, which have invested $2.2 billion and have created more than 100,000 direct and indirect jobs.

However, in order to achieve the FTA’s full potential, the United States is providing $1.5 million in assistance designed to attract foreign investors to Morocco, to foster local economic development, and strengthen the legal and regulatory framework, according to the U.S. State Department. 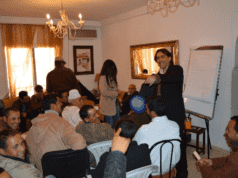 A Model to Implement Moroccan Development