I was born in Kenitra. A city that still lives in my mind and will do so forever. And since that moment of birth, as with all of us, the course of life has had me go through different personal and professional experiences. The memories of our childhood, the treasure of wisdom and love that our parents keep for us, the dialogues and the moments of silence in our Zankas (Streets) and the wonders of life formed most of our modes of understanding of the world and its complexities. An understanding, I think, that cannot be relatively accurate and productive unless it is academically challenged and enhanced.

The radical changes in our social and ethical discourses, the excessive use of technology, the impressive sensitivity to Internet and the multiplicity of geopolitical and sociocultural phenomena are directing us to a new understanding of realities and occurrences and to a new reading of life. Our definitions and identifications of space and time are so relative. Gender, race, sex, and religion are no longer common lexical terminologies. They are now being approached culturally and politically with critical sensitivity.

Waves and waves of interpretations and ideologies are reaching our shores and it is time for the media and school to play their magical role. Media now is within our reach and the limits of its influence are beyond our imagination.

In the world of today, the media can nurture the culture of admiration of human dignity and can also cause confusion and contribute to the instability. Media now is a variety of choices and options, a broad range of explicit and implicit connections and combinations and an infinite possibility of manipulation. It is a magical blend. Schools of today are also no longer buildings with different departments where programs are pre-identified. Now, schools intervene, provide new disciplines of knowledge, and introduce new definitions of learning.

Currently, our learning experiences reach new directions and require an awareness of continuous and accelerated change in thinking. Learning now is a socialized process where both instructors and students pick up coded and uncoded messages throughout their shared experiences in classrooms. Learning now is linked to multiple disciplines and thinking is inspired by new obsessions. Films are not merely films and words are not simply lexical choices. We need adequate quality of learning that can provide us with the critical skills of investigation and the historical knowledge of thought and enable from us the scientific calculations of things.

In moments of reflection, the thinking of today becomes a thinking of clicks and buttons. Technology and web-based practices have been invading our lives and dramatically sharing our privacy. It is a new world with new ends. Human activities are influenced now by new trends, and our experiences are centered on new concerns. In the world of today, technology is offering us new sources of information and making of our life a more inventive and tech-based experience.

In different occasions, we may be caught between two extremes. The Right or Left, the Liberals or the Conservatives, the Protestants or the Catholics, the Sunnis or the Shiites, the Palestinians or the Israelis, the Whites or the African Americans, and so on that one time in the recent past the great scholar Edward Said saw the geographical distinction between the East and West to be an ideological line between two realities.

Let us reflect on our understanding of gender as an example. Gender is no longer a mere determination of sex and a biological identification of human body. Now, gender introduces hypothetical propositions and multiple perceptions that our sexes are channeled into different directions. What is alarming is our failure to raise the awareness of the public on more balanced approaches to issues of gender and sex and to incorporate them in our concerns.

Yet, the multiple interdisciplinary perspectives that are within our hands may allow us the strength to sail ourselves to the safe shores of knowledge; so both man and woman can be seen and perceived to be equal members of our society. Each one can enjoy his or her right in harmony with admiration and respect of their differences.

In the horizon, I do not see a certain limitation to change. Change now is an aspect, a quality and a discipline. The current debate on multiculturalism and diversification, the severe addiction to screens and the growing influence of geopolitics and socioeconomics are re-defining our curricula and are forcing us to know the world in a different way. The recent war in Gaza, the current debate on the Egyptian president, Mohamed Mursi, the spirit of independence that is being felt among Catalonians in Spain, and the controversy on La Francophonie and Tamizght here in Morocco are vivid illustrations. 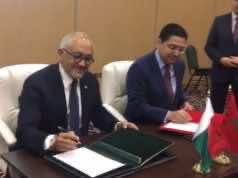