King Mohammed VI inaugurated, Wednesday, the first Casablanca tramway line, a structuring project that attests to the Sovereign’s commitment to allow for the economic capital of the Kingdom to rank among the world’s major cities.

A major component of the Casablanca urban development program, the first tramway line, which is fruit of French-Moroccan partnership, will contribute to solving the transport problem in the city, by ensuring complementarity between bus and taxi networks, preserving the environment by reducing pollution and noise, and supporting the economic development of the region as a whole by creating direct and indirect jobs.

The 31-kilometre line links the main neighborhoods of the city, and includes 48 stop stations.

This mode of green transportation, which required investments of 5.9 billion dirhams, is but the first phase of a comprehensive clean transport network and of a major project to improve mobility in Casablanca.

King Mohammed VI, accompanied by French Prime Minister Jean-Marc Ayrault and the head of Moroccan Government, Abdelilah Benkirane, carried out an inaugural trip between the United Nations square and the Mohammed V square.

The Sovereign decorated executives from the Casa Transports company for their distinguished contribution to the project.

The inauguration ceremony was attended by Moroccan and French ministers, representatives of companies involved in the implementation of the Casablanca tramway and by several national and foreign guests. 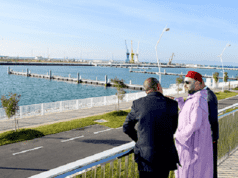