French President Francois Hollande said on Wednesday that he had not come to Algeria to offer “apologies” for crimes committed during the colonial period.

“I have not come here… to offer repentance or apologies. I have come to say what is true,” Hollande told a news conference in Algiers, on the first day of his landmark visit to the former French colony.

“There is a truth to be spoken about the past and there is also a willingness to face the future. And this trip, it is focused on the future, to try and mobilise our two societies,” the French president said.

“But at the same time, (there must be a) willingness not to let the past block us but on the contrary to work for the future.

Once it has been recognised, the past must allow us to go much faster and much further in confronting the future.”

“That is what I will tell Algeria’s parliamentarians tomorrow,” he added.

Prior to his visit, some 10 political parties, including four Islamist groupings, denounced the refusal of the French authorities “to recognise, apologise for and compensate” the crimes committed during 132 years of French colonial rule.

Hollande is due to address the Algerian parliament on Thursday morning, as he wraps up his visit. 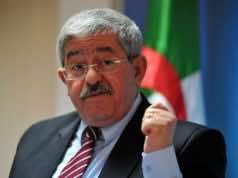