Aexandria – clashes between rival protesters erupted Friday in Egypt’s second city Alexandria, on the eve of the final round of a referendum on a new constitution backed by the ruling Islamists.

Black-clad riot police fired tear gas to try to quell the street battles between dozens of men, as lines of officers kept thousands of Islamist demonstrators and hundreds of opposition protesters apart.

Six people were hurt, according to an initial count by the health ministry.

Alexandria, which voted last weekend in favour of the divisive new constitution in the first round, has seen clashes break out on several occasions amid nationwide rallies for and against Egypt’s Islamist president, Mohamed Morsi.

Early this month in Cairo, the confrontations turned deadly outside of Morsi’s palace when eight people were killed and hundreds were wounded.

The army has since deployed 120,000 soldiers to bolster 130,000 police tasked with maintaining security during the volatile voting.

The secular-leaning opposition sees the proposed constitution as weakening human rights and opening the way to creeping sharia-style strict Islamic laws under Morsi. It is urging a “no” vote in Saturday’s second round.

Analysts, though, said it was almost certain the new constitution would be adopted — but that such an outcome would not end Egypt’s political crisis.

The ongoing instability has also knocked the legs out from under Egypt’s economy, which has been limping along since the early 2011 revolution that ousted the 30-year autocratic regime of Hosni Mubarak.

The International Monetary Fund has put on hold a $4.8 billion loan Egypt needs to stave off a currency collapse, and Germany has indefinitely postponed a plan to forgive $316 million of Egypt’s debt.

The head of the National Salvation Front opposition coalition, former UN atomic energy agency chief Mohamed ElBaradei, warned in an online video that “currently, the country is on the verge of bankruptcy”.

He said “a solution is still possible,” as long as Morsi was prepared for “sincere dialogue” and allowed a whole new constitution to be drafted through a more inclusive process.

Supporters of both sides have taken to the streets to sway voters to their side of the debate in the run-uptern Cairo district that will vote on Saturday, an opposition campaign volunteer who give his first name as Maher said he pointed out to passersby “who remains committed to the revolution and who betrayed it” — implying that Morsi’s Muslim Brotherhood had let down the country.

A pro-constitution campaigner in the same area, Abdallah Hassan, said his counter pitch was to inform people of “the benefits that will come out of this constitution by voting ‘yes’,” principally stability after so many months of turmoil.

Observers said that even if the draft charter was adopted, it would do nothing to resolve the festering political confrontation.

“Everything suggests the vote will go the way the Muslim Brotherhood wants… But the misleading conclusion it will take away is that there is an overwhelming victory allowing it to continue on its chosen path,” Hassan Nafaa, an analyst and commentator, said in the newspaper Al-Masri Al-Youm. 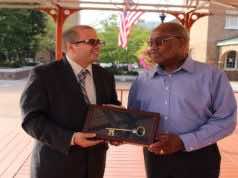