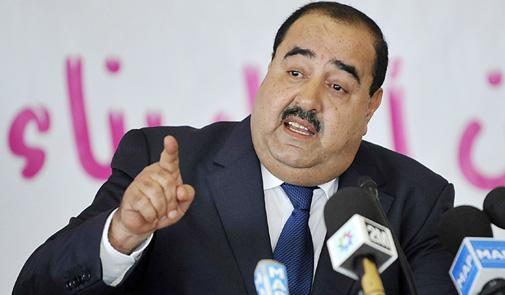 Rabat – On Monday, December 17 in the afternoon, Driss Lachgar couldn’t get over his surprise victory in Congress when he receives a call from the royal palace, congratulating him after his election as first secretary of a political party which was very much liked by Moroccans and the monarchy fifteen years ago. This call follows a congratulatory message sent by King Mohammed VI to Driss Lachgar, “an experienced campaigner and statesman”.

According to several sources, the former Minister for Relations with Parliament’s victory highly pleased the royal palace. Driss Lachgar, known for his outspokenness and his animosity towards the Islamists, despite a short honeymoon in 2009 which was aborted when he joined the government of Abbas El Fassi- can be a formidable opponent and an outstanding polemicist.

For a year, the Moroccan political scene has been dominated by the PJD, always victorious since the general elections of November 2011. In September, it again won the elections in Marrakech and Tangier. The opposition parties do not seem to have found a solution. The Party of Authenticity and Modernity (PAM) is being very vindictive, the National Rally of Independents (RNI) too soft and the Constitutional Union (UC) is almost nonexistent.

Meanwhile, the USFP has suffered from an aging direction whose average age was around 65. The arrival at the head of the Socialist Party, an historic Moroccan political party, of a politician who has been versed in political games and who could hold out to the head of government, Abdelilah Benkirane, participates in a rebalancing of the political landscape in the kingdom.

If the palace is apparently pleased by Driss Lachgar’s election, the PJD doesn’t enjoy it as much.

The head of the government and of the Islamist political group allegedly confessed to his closest associates that he was suspicious and disapproved of the “unethical practices” of the new first secretary of the USFP. Before the elections of 2009, the new strong man of the socialists fought relentlessly against the Islamist PJD.

In 2003, after the attacks of May 16, he was among the politicians described as “eradicators”, who demanded the dissolution of the PJD. After getting along with the PJD in the election of mayors in 2009, in which he called for the reconstitution of the historic Koutla, he made a radical move. He joined the government of Abbas El Fassi in 2010 and defended the choice of the opposition to Benkirane’s government, adopted by the USFP after the elections of November 2011.

Today, even though the USFP no longer has the same presence or popularity as it did twenty years ago, it remains one of the Moroccan political parties which are able to play a leading role on the political scene of the country.