The Syrian vice president’s criticism of leader Bashar al-Assad has highlighted the cracks in the regime’s highest ranks, pitting supporters of compromise against the president’s hardline inner circle.

Assad’s closest aides believe the regime should keep fighting and that they can still win a war against rebels which has left more than 44,000 dead in almost two years.

“Power has become increasingly concentrated in the hands of just a few people in Assad’s clan, which has grown autistic and seems to have chosen to just keep going,” Paris-based expert Karim Bitar told AFP.

Assad’s circle includes his brother Maher, 44, who heads the army’s elite Fourth Division and his wife Asma, an analyst told AFP on condition of anonymity because of the sensitivity of the subject.

Like Assad, all are members of the minority Alawite community, except his wife, who is a Sunni Muslim.

Presidential affairs minister since 2009, Mansur Azzam, 52, and former Al-Jazeera journalist Luna al-Shibl are also close to Assad. Both are members of the Druze community.

“This is the group that takes the decisions,” the analyst said. “Bashar, who runs the show, only listens to people who owe him, for the most part, for their rise.”

But several high-level officials, members of the state apparatus and part of the army command, understand — like Vice President Faruq al-Sharaa — “that neither the rebels nor the army can secure an all-out victory,” said Bitar.

“As such, they are hoping for a negotiated solution, which would prevent them all being swept away should Assad fall,.”

In an interview published in a pro-Damascus Lebanese daily, Sharaa, who for 22 years served as foreign minister, said he favours a negotiated solution to the conflict, rather than the president’s strategy of crushing the revolt militarily.

Assad “does not hide his desire to press on militarily until the final victory (and he believes that) after this, political dialogue will actually still be possible,” Sharaa told Beirut-based Al-Akhbar.

Experts say that out of those who share Sharaa’s views, two women stand out.

One of them is Buthaina Shaaban, a 59-year-old Alawite who was close to Assad’s father Hafez, and worked as his translator before becoming minister of expatriate affairs. In 2008, Shaaban became Bashar al-Assad’s advisor.

The other is Najah al-Attar, a 79-year-old Sunni, who was minister of culture from 1976 to 2000, and was then appointed vice president along with Sharaa in 2006.

“It seems this group has been totally excluded from decision-making, because they think the war should end with no winner or loser,” said a former minister who took a distance from the regime when the revolt broke out in March 2011.

Assad’s clique, the minister added on condition of anonymity, “treats them like cowards.”

The journalist who interviewed the vice president for Al-Akhbar said “Sharaa is not in the decision-making circle, and communicates infrequently with the president.”

On Sunday, Information Minister Omran al-Zohbi played down Sharaa’s assessment. “It is one opinion among 23 million opinions in Syria, which is a state led by institutions and leaders who will give the final opinion,” he said.

After 50 years in power, differences have emerged even among Alawites, as young members of this offshoot of Shiite Islam are killed daily in battle. 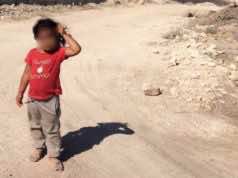