A Moroccan court has sentenced a political activist to a year in prison for drug trafficking and possession, a human rights group in the kingdom said on Friday.

Driss Bouterrada of the “February 20” movement that demands social justice and political reforms was also handed a fine of 5,000 dirhams ($630, 480 euros) by the court in Rabat, said the Moroccan Association for Human Rights (AMDH).

Bouterrada, a street vendor in his 30s, is in prison in Rabat’s twin city of Sale after being arrested on December 10 and charged with drug dealing.

The AMDH and his lawyer Ismail Ammar said the case was politically motivated.

Bouterrada is one of Rabat’s most easily identifiable activists for his signature Fez hat and traditional robes that he wears at demonstrations, and his parodying of King Mohammed VI.

Hundreds of members of the February 20 movement gathered in Rabat on Sunday to demand the release of all political prisoners. They also charged that Bouterrada was unfairly detained.

The movement was formed in February last year by youths demanding democratic reform and action on a wide range of social grievances.

Earlier this month, a coalition of 18 Moroccan human rights groups launched a campaign to free more than 70 jailed activists, notably members of the movement.

Prime Minister Abdelilah Benkirane has said most popular demands for reform have already been met in Morocco, citing the fact that “the February 20 movement no longer (protests)” as proof.

Benkirane also said its members would not be allowed to become “revered”. 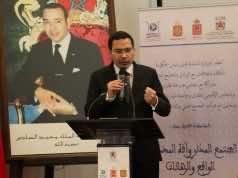