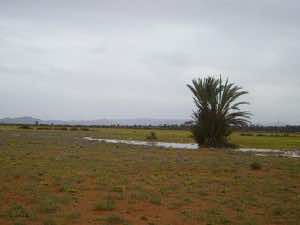 Collective lands have become a heated issue in Morocco. They are deemed to be looted excessively by private and public real-estate companies and quarries. As a result, the situation has urged the real owners to take actions such as protesting in the street, organizing symposia, or having sit-ins. For these people, the law regulating these lands prevents them from benefitting from them.

The collective lands belong, originally, to ethnic groups. They were regulated through customary laws. Those lands were inalienable and could be neither seized nor transferred, for their usufruct belonged to the tribes, not individuals. This reflects the solid unit of the tribal structure in Morocco.
However, with colonial penetration, French authorities looked for a way to divide such unity to facilitate colonization in Morocco. It passed Dahir 1919 that put collective lands under the state guardianship via the Ministry of Interior. This law deprived the real owners of the right to manage and exploit their lands directly. The right of disposal could not be carried out but via the guardianship council. Unfortunately, it is still in force today. According to officials, collective lands are estimated at 15 million hectares. 85% of it is reserved for pasturage and the rest for agriculture. They are located in 55 provinces.

The question of collective lands has arisen since the introduction of laws by French authorities. They brought about bad outcomes regarding the beneficiaries. The latter claim that the law makes it difficult for them to exploit their lands, as they do not benefit from the revenues of their lands have not been paid. Therefore, many sit-ins take place in different regions of Morocco. Such was the case of Ait Assou in Taza province, and that of Imidar that still continues up until now.

A number of symposia have been held to discuss this matter and come up with recommendations. The recent one was organized on 24 November, 2012 by Adrar Association for Development and Environment in Tahla. It was titled “Collective Lands in the Service of Development.”

In a nut shell, actions taken towards such issues differ. Still, they are all aimed at searching for alternatives regarding the laws regulating the collective lands in Morocco. It is time the government took valiant initiatives to settle such complex cases and put an end to the suffering of ethnic groups.