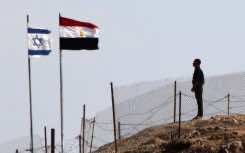 Egyptian prosecutors were interrogating on Tuesday an Israeli man in the Red Sea port of Nuweiba who is suspected of espionage, a judicial source said.

“An Israel man was arrested on Monday in Taba on suspicion of espionage. He was remanded today in police custody for four days pending investigation,” the source said.

The suspect “infiltrated into Egypt through a mountainous area near Taba,” the source added, without elaborating.

In October 2011, Egypt freed a US-Israeli citizen under a prisoner exchange after he was arrested in Cairo and accused of working for Israel’s Mossad spy agency and sowing sectarian strife in Egypt, allegations he denied.