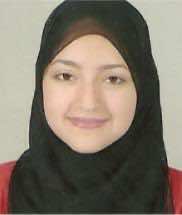 He suddenly woke up at dawn, feeling the left side of the bed getting colder and colder; the thing that woke him instantly since he wasn’t used to her absence. He moved his right hand a bit further on the bed to feel her presence, a move that he had seen in movies too many times and never believed could actually occur in real life, until it happened to him that very morning.

Shockingly, she wasn’t there. He took a couple of minutes to wonder about where she could have been at this hour. “She could have gone to the bathroom or even to the kitchen,” he said to himself. It wasn’t until he saw the empty closet in the middle of their bedroom that he remembered what had happened the night before.

She too woke up at dawn, with every nerve in her system tense, with every bone in her body aching, with both her eyes swollen, with a wet pillow and dried tears on her cheeks, and with a headache that was the end product of all the above. Still, she managed to smile, relieved that it wasn’t just a dream, and that all the pain she had endured, all the tears she had shed, all the disappointment she had felt, all the mixed emotions of the night before were real. She was happy because, for her, their fight meant that he cared. And the light of the sunrise that very morning symbolized a new and fresh beginning for both of them.

The fact that she was a housewife and he was a full timer at a company caused the emotional gap between them to widen day after the other. The problem is that the only reason she made the decision of quitting her job and staying at home was to take care of him and of their future children, and offer them love and affection around the clock. At least, that’s what they had promised each other before they wed: He’ll work outside and bring the household as much money as he can. In return, she’ll take care of the house work, will always be there eagerly waiting for him when he gets back home, ready to please and satisfy him in any possible way. And of course, he’ll do the same to her since that’s what healthy relationships are all about: Give and take!

Unfortunately, lately, he seemed to drain her out of every grain of care and affection she has in her without charging the battery of her heart with any love in return. His work kept pulling him away from her no matter how hard she pulled back. He ceased to comment on her attractive looks, her delicious meals, her tender touches, and on everything else that he used to admire. The way she saw it, he didn’t love her anymore, or at least, he didn’t love her as much as he did before, and the mere thought of that shred her heart into pieces that weren’t easy to collect.

As far as he was concerned, he never stopped loving her, not for a second since the day he first fell for her, he just stopped showing it due to all the pressure he was undergoing at work, and the need to make more money so that he grants her the lifestyle he had promised her before they tied the knot. Also, the fact that she was always there for him never leaving his side made him take her for granted without realizing it.

Unconsciously, his recognition for her diminished, his love for her hid deep down in his heart since he didn’t feel the need to show it anymore. He was unaware that this lack of appreciation he was showing her was eating her up alive, which caused her rage to detonate that night, just like a mine that he recklessly stepped on.

She put her suffering in plain words, shouted, swore at him, and even hit him a couple of time. She couldn’t bear his carelessness anymore and decided to leave him and all their memories behind. “Love me or leave me, but don’t you dare ignore me!” she told him in tears. It wasn’t until he saw her suitcase filled with her clothes that he realized she was indeed leaving him. He got down on his knees, begged, cried, explained the reason behind his cold behavior towards her, promised to treat her again the way she deserves to be treated, offered to please and satisfy her in any way possible, but her leaving wasn’t something he could live with. “I acknowledge my ingratitude towards you and promise you to always appreciate you and never take you for granted ever again. I don’t know how to live without you, and even if I did, I just don’t want to”, he pleaded.

Upon seeing his eyes full of tears and hearing the tone of his voice that seemed so sincere, she knew that he will treat her differently from now on. However, she wasn’t about to let his previous behavior go unnoticed. She resisted the urge to stay and give in to his plea; she wanted to have him actually experience what it is like to be neglected by her, and she too needed a little time to mend the scars that he left in her. She gathered her strength and left anyways heading towards her old room in her parents’ house.

All the pain that she woke up feeling the following day didn’t matter as long as it confirmed that he did hold on to her and refused to let her go. As for him, her absence was killing him, but he had to endure it since he caused it all himself, but he wasn’t going to make the same mistakes twice. And that same morning, he started planning how he’ll passionately love and treat her every minute of every day, for the rest of their lives.