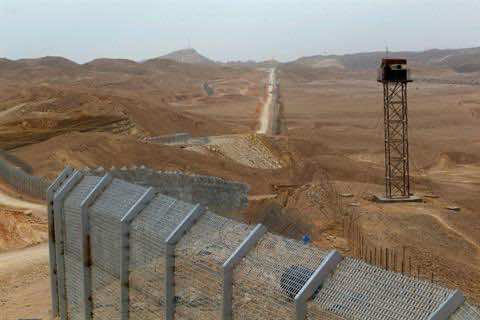 Israeli Prime Minister Benjamin Netanyahu’s office said on Wednesday that the final section of a security fence along the border with Egypt’s barren Sinai should be finished by the end of March.

Netanyahu on Wednesday attended a ceremony marking the completion of 230 kilometres (144 miles) of the barrier, with just over seven miles still to go, in the vicinity of the Red Sea resort of Eilat.

“Work on the 12 kilometres of fence in the Eilat area is expected to be completed within three months,” his office said.

Netanyahu is campaigning ahead of a snap general election on January 22, in which his government’s efforts against illegal immigration are likely to figure prominently.

Israel began constructing the fence in late 2010 to stem an influx of thousands of illegal migrants through the porous border.

The statement said that the fence had already had a dramatic effect in the past year, even before its completion.

“While 2,295 people crossed the border illegally in January only 36 got across in the first part of December,” it said.

With the fall of Egyptian president Hosni Mubarak and increasing lawlessness in the Sinai, the fence has taken on added security significance in helping stop cross-border militant attacks, the Israeli military says.