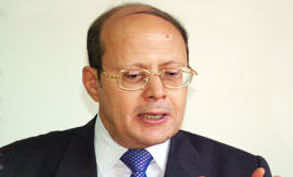 An Egyptian newspaper editor is under investigation for allegedly insulting President Mohamed Morsi, a prosecution source said on Wednesday, a day after a similar probe was launched against a comedian.

State prosecutor Talaat Ibrahim ordered the investigation into Abdel Halim Qandil, editor of the Sawt al-Umma newspaper and a critic of Morsi, after a political activist sued him for allegedly insulting the president.

On Tuesday, the prosecutor ordered in investigation into satirical talk show host Bassem Yousef, also on charges of insulting Morsi.

The prosecutor was also weighing a complaint filed by the presidency against the leading independent al-Masry Al-Youm newspaper, after it mistakenly reported on its website that Morsi was to visit the hospital hosting ousted dictator Hosni Mubarak.

A controversial new constitution, voted for by Egyptians in a December referendum, became the focus of Egypt’s worst political crisis since Morsi came to power in June.