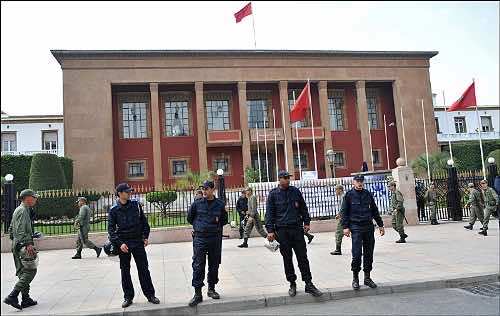 Controversy erupts in Morocco as a MP is allegedly beaten by law enforcement officers.

Controversy rocked Morocco when law enforcement officers allegedly beat up a MP while breaking up a demonstration staged by unemployed graduates in Rabat last week.

The subject of Abdesamad El Idrissi’s beating by police, an MP representing the Party of Justice and Development (PJD), was raised during a session of Parliament on Monday (December 31st).

The young MP intervened during Thursday’s protest to ask police officers to release a young unemployed graduate who had been assaulted and arrested by law enforcement officers.

The Minister in charge of relations with Parliament, El Habib Choubani, said that what happened must be dealt with in a way which respects institutional authority.

“The behaviour of a civil servant should not call the policy of an entire government into question. An inquiry is under way to establish who was responsible,” he said.

MPs are speaking out against what happened. Abdellah Bouanou, the leader of the PJD group in the Chamber of Representatives, has underlined that this assault sets a dangerous precedent, which calls for decisive action to be taken against the assailants.

The Speaker of the Chamber of Representatives, Karim Ghellab, immediately sent a letter to the prime minister and interior minister to ask for an inquiry to be opened.

Foreign Minister Saad-Eddine El Othmani said during a meeting of the National Council of the PJD on Saturday that such practices are unacceptable, adding that Interior Minister Mohand Laenser gave instructions for an investigation to be carried out and that the outcome of this investigation must be awaited.

Mohamed Sellaki, a political analyst, says that the incident involving the young MP raises the issue of the wrongful use of violence by the law enforcement agencies when breaking up demonstrations.

He argued that the justifications given by Prime Minister Abdelilah Benkirane on November 30th in response to questions about this issue from MPs have encouraged the law enforcement forces to overstep.

Benkirane said that law enforcement officers act within the law when intervening and that they are merely doing their job in breaking up demonstrations to avoid situations where demonstrators are arrested. He called on members of the public to respect them and refrain from provoking them.

Sellaki asserted that the violence which the PJD MP suffered should spur Benkirane and his team to carry out an objective assessment of the use of violence against members of the public. He also stressed that even MPs within the ruling coalition have raised the alarm about the issue.

Members of the public also have concerns.

“We are all witnesses, on the streets of Rabat, to the violation of human rights,” teacher Karima Afellai said.

“Young people are being beaten with truncheons outside parliament. I hope that the incident involving the MP will mean that things are put right, because this is not worthy of today’s Morocco,” she said.