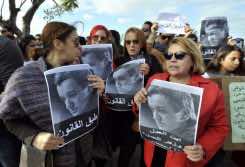 A Tunis court on Thursday remanded in custody the head of a private television channel accused of corruption and issued arrest warrants for five former TV executives in the same case, judicial sources said.

Sami Fehri, the head of Ettounisiya television, was detained at the end of August on charges of embezzling public funds in a corruption case that goes back to the days of ousted dictator Zine El Abidine Ben Ali.

Fehri was not in court on Thursday when the judge rejected a request for his release. He has been in hospital since December 27 after staging an 11-day hunger strike in protest at his incarceration.

He argues that his arrest is linked to a satirical television show on his private channel, which is known to be critical of the Islamist-led government.

The court also issued arrest warrants for five former executives from state television who were wanted in connection with the corruption case, the sources said.

The court of cassation had ordered Fehri released in November, but the prosecution blocked the decision and referred his case to another court.