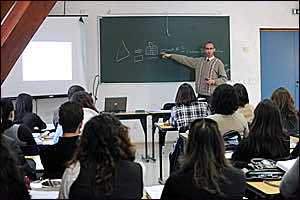 Whenever I ponder the situation of Morocco, my mind jumps to think about Moroccan faculties of arts and humanities as centers of ‘time and energy squandering,’ as an official in the new Moroccan government recently stated, and who was widely criticized for doing so. Is Morocco in need of those two specialties to achieve real development? What can those faculties, with the theoretical subjects they offer, give to Morocco? Is reading bulky controversial books about history, literature, linguistics or philosophy liable to classify Morocco among the ‘developed countries’? In fact, studying the aforementioned specialties have some benefits, but I reckon, as secondary and complementary subjects to scientific and practical specialties such as: engineering, medicine, management, etc.

As a Master student of literature and linguistics, ‘futile’ and ‘pointless’ subjects were schedules. For instance, in syntax class, we, as master students, were supposed to cater for the difference between ‘the surface structure’ sentence, ‘he killed the bird,’ and its ‘deep structure’ counterpart: ‘was the bird kill-ed.’ The later form was ‘drilled’ to be the ‘original and basic’ sentence form in the historical development of English language, and which should be recognized!! In fact, the only thing which I was deeply convinced of was that ‘I was killing my precious time and energy;’ which I could have invested in some practical studies.

Another example can be drawn from literary class. Bulky books of Kayaty Spivak, Michael Foucault … were assigned as main references in ‘Postcolonial’ theory class. Most of those bulky books contain ‘contradictory’ facts together with historical readings from mainly a very limited viewpoint; that of the ‘powerful’ and the ‘oppressor’. In this respect, I will never forget those discussions we held in and out the classrooms, especially with that ‘fervent’ student of Postcolonialism and Orientalism. He kept stating that “such subjects characterises human thought” all over the world; “a quest for making the most sophisticated machines, cars, planes…is what overwhelms ‘the Western/ developed psyche,” was my readymade response whenever our discussions diverged to that end. On the whole, the deplorable fate of graduates from the aforementioned theoretical specialties become clear after graduation, a moment in which thousands of notions and theories keep crisscrossing in their minds without the ability to make even simple invention.

Accordingly, we may pose the following question: how can we motivate those students who are ‘literary inclined,’ and convince them to opt for scientific and technical studies? I think that one of the ways to solve that problem is through offering ‘seductive’ incentives, such as grants, to students in the middle and secondary schools in Morocco. Also, the Moroccan government should organize competitions in which students compete to prove their competencies through proposing possible practical solutions to ‘black spots’ in many Moroccan roads where deadly accidents take place. Also, those ‘research’ students should be invited to suggest solutions to awkward issues concerning (infrastructure, industry, medicine, administration…). Besides, new universities should be established with highly-qualified staff and updated equipment.

On the contrary, faculties of arts and humanities should be reduced in number, and the number of accepted students should be reduced, too. Meanwhile, various subspecialties in those two fields could be clustered in very limited units. By doing so, the Moroccan government would set the basic foundations for a potential active, creative and developed society. Yet, common sense and logic dictate the fact that we cannot do without arts and humanities. But, I deeply believe that scientific students can have enough time to study those fields, on their own and in their spare time, since the study of those specialties does not require laboratories and practical work. I can here quote an outstanding Syrian surgeon Khalis Jalabi, of whom some of his articles are published in Almassae newspaper. Jalabi successfully proves how far a scientist can go in literature and philosophy without a formal education in arts and humanities universities.

We cannot deny the fact that the Moroccan Ministry of Education has set ‘a work map’ in which the majority portion of high school students should be oriented to scientific and technical specialties. The Moroccan Ministry is therefore aware of scientific and technical training for the future generation of Morocco. So, further efforts must be done by education planners and decision-makers in Morocco to establish more technical and scientific universities equipped with modern laboratories and research centers. Similarly, humanities and arts should be relegated to a secondary position in Moroccan educational policy.

In conclusion, we don’t aim at referring contemptuously to any field of thought or person, but we are drawing attention to the growing necessity to devote much time, energy and enthusiasm to scientific and practical specialties due to their enormous contribution in developing Morocco. Those are the very specialties which are liable to classify Morocco among countries which are ‘on the path of development.’