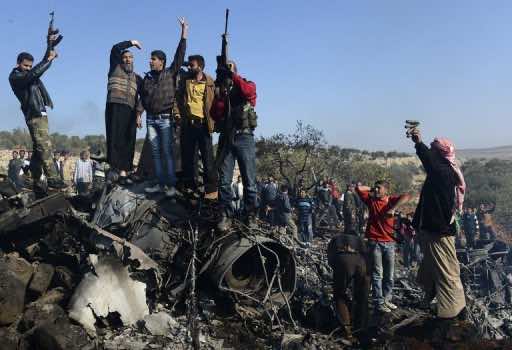 The last option for Syria’s President Bashar al-Assad, who is determined not to back down after 21 months of deadly conflict, is to battle to the end from a fortified Alawite statelet, analysts believe.

Driven from large swathes of territory in the north and east by rebels, the army is now focused on maintaining its grip on the key axis stretching from Damascus to the central province of Homs and on to the coastal Alawite heartland.

The embattled Assad will “cling to power until the end, even if it means more massacres,” said Middle East analyst Agnes Levallois of the prolonged crackdown and fighting that the United Nations says has left more than 60,000 dead.

“The longer he hangs on the more assured he becomes of his ability to stay in power… not through retaking the whole country but by holding onto Damascus, the key junction of Homs province and the route to the Alawite mountains,” she said.

According to Andrew Tabler, an analyst at the Washington Institute for Near East Policy: “Bashar’s options are to stay put in Damascus and try to retake areas lost… or perhaps a reconstituted Alawite-dominated area on the Syrian coast.”

“The regime will be forced out of the north and east soon, although it seems at a terrible price… with more artillery and missiles and the threat of chemical weapons,” Tabler said.

The regime has since mid-2012 claimed to be launching its final crackdown on rebels in the Damascus suburbs.

Levallois said Assad “still has the ability to control Damascus for months before considering the option of the Alawite region,” a coastal stronghold of his co-religionists from the offshoot branch of Shiite Islam.

It is an open secret, Syrians and analysts told AFP, that the army had arsenals throughout the Alawite mountains between the coastal cities of Latakia and Tartus, long before the outbreak of the uprising in mid-March 2011.

These arms depots have not yet been used by the some 120,000 troops still loyal to Damascus, analysts say.

With these strengths, “Assad is not considering dialogue because he feels — wrongly of course — that he can win and that he still has the resources to reject negotiations on his departure,” Levallois said.

She believes Assad is squandering his chances to leave on his own terms.

“He could have capitalised on (international envoy) Lakhdar Brahimi’s visit to Damascus and the openings by the Russians to explore the possibility for dialogue. Instead, he resorted to even greater violence,” she said.

“If Assad refuses the Brahimi initiative it means he is really living in a total bubble, cut off from the world with zero sense of reality, or thinks that forces on the ground can still ensure his survival,” Levallois said.

On the heels of a flurry of diplomacy, including trips to key Damascus ally Moscow, UN and Arab League envoy Brahimi announced a proposal to end the conflict in Syria through a ceasefire, the formation of a new government and elections.

But the plan did not specify the fate of Assad, whose departure is a given for the Syrian opposition before any national dialogue can take place.

Peter Harling, a Syria specialist at the International Crisis Group, said the Assad regime has stuck to the same logic since the crisis began.

“He believes he is defending himself, and by extension Syria, against an aggression that leaves him no other option,” Harling said.

It follows that the violence is not Assad’s fault but the product of a conspiracy, for which there is a solution.

“That solution will not come from him, but from his enemies, who will at some point realise that the price of change is too high and abandon their undertaking.”

The regime, which maintains a cohesive core and military power, can “continue to raise the stakes as it has done for nearly two years in the hope that someone will offer a solution that takes their interests into account,” Harling said.

The recent UN announcement that 60,000 people have been killed so far will do little to deter Assad.

“He is relying on the logic of a scorched-earth policy, even if it means 300,000 people are killed,” Levallois said.