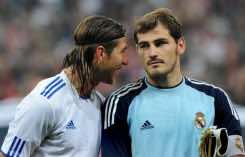 Real Madrid coach Jose Mourinho on Saturday hinted he might not necessarily hand keeper Iker Casillas his place back Sunday against Real Sociedad.

Mourinho fielded young stand-in Adan for the final pre-winter break match, a 3-2 loss to Malaga last month and Mourinho implied Casillas might be benched again, saying the experience did not have to be a negative one.

“Confidence is an important element – but so is competition (for your place). To be in the comfort zone for too long is not good, that goes for any player,” Mourinho told reporters at a press conference, adding he favoured some rotation.

“The one who plays Sunday will not play (in the Cup) on Wednesday and vice-versa.

Last week, Casillas vowed to fight to regain his spot, explaining: “I am not a machine. I, too, have to learn from my mistakes.”

Asked if he had lost his hunger to win more titles, the Spain captain said: “When I don’t have that hope I won’t be sitting here.”

Despite being 16 points behind leaders Barcelona, Mourinho insists Real must keep plugging away.

“We will play the league just as if we were in top spot or just a few points behind the leaders,” he insisted.

Mourinho also said he would not attend Monday’s Ballon d’Or gala in Zurich where the world player of the year and coach of the year will be unveiled – he is shortlisted with Spain coach Vicente Del Bosque and ex-Barcelona boss Pep Guardiola for the latter category – owing to preparations for a Wednesday Cup date with Vigo.

“I have an important Cup date Wednesday and have to work so I shan’t be going,” said Mourinho, with Real 2-1 behind from the first