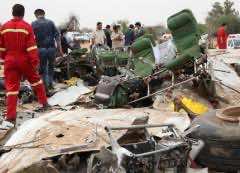 A Moroccan couple and their three children died Saturday when their private plane crashed a few moments after taking off from the Grenoble airport in southeastern France, local police said.

“There were five” people aboard the plane. “Five people died,” a police spokesperson told AFP, adding that one of the parents was piloting the aircraft.

The family was from Casablanca, had spent the holidays at the Meribel ski resort and were heading back to Morocco with a stop scheduled in Spain, police said.

The father was identified as 46-year-old businessman Farid Berrada, whose  late father Mohamed was a senior leader of Morocco’s Istiqlal party and  founder of the French-language newspaper L’Opinion.

The plane crashed in the village of Saint Pierre de Bessieux, a few moments after taking off from the Grenoble airport nearby.

A village resident alerted authorities after seeing the plane crash into a hill. When rescue services arrived, the aircraft was on fire and all aboard were dead.

Police are investigating the cause of the crash.