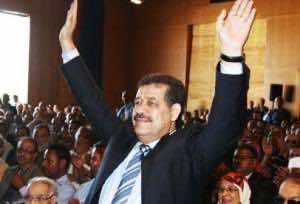 The head of Morocco’s Istiqlal (Independence) party, the main ally of the ruling Islamists, has asked for a cabinet reshuffle, saying 20 percent of ministers should be women, media reports said on Friday.

“The reshuffle is an opportunity to inject new blood… and increase the representation of women to 20 percent,” Hamid Chabat said in an official request to the head of the government which was published in local media.

The current government led by the head of the Justice and Development Party, Abdelilah Benkirane, has only one female minister in the 31-member cabinet, in charge of family affairs.

Chabat, the mayor of Fez, was elected to lead Istiqlal in September and has regularly referred to a cabinet overhaul. This was the first time he has made a formal request for a reshuffle, however.

“We must also reduce the ministerial portfolios… (by) redistributing them based on the proportion of seats won by each party,” he was also reported as saying.

Benkirane has yet to respond to his request.

Chabat’s request comes almost a year after the inauguration of the present government following a historic win by the Islamists in November 2011 legislative elections.