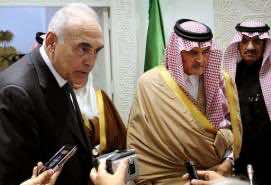 Saudi Arabia and Egypt on Saturday called for a peaceful solution to the conflict roiling Syria, but said the terms of a settlement to end the bloodshed there must be defined by the Syrian people.

“A peaceful solution in Syria is necessary and it is desired by Arab countries and the international community,” Saudi Foreign Minister Prince Saud al-Faisal said at a joint news conference with his Egyptian counterpart Mohammed Kamel Amr.

“But the way out of the crisis and the conditions for a solution are the responsibility of the Syrian people.”

“If a peaceful solution can stop the bloodshed it will be desirable, but ultimately it is the Syrian people who will decide how to solve their problems,” he said.

Saudi Arabia and Egypt, two Arab heavyweights, have repeatedly called for the ouster of Syrian President Bashar al-Assad amid the raging violence gripping the country.

According to the United Nations the 21-month conflict has so far left more than 60,000 people dead.