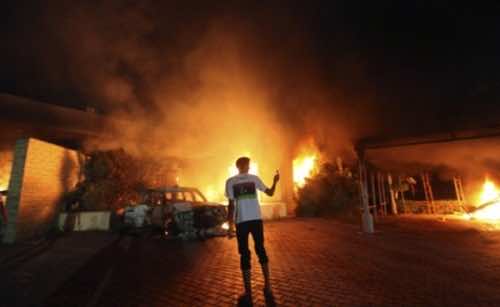 Libya is pushing forward with its investigation into the deadly September 11 attack on the US consulate in Benghazi, but fear of retaliation by Islamist extremists has proved a hurdle.

Security reports point to the possible involvement of an Al-Qaeda-linked Islamist group in the attack that killed ambassador Chris Stevens and three other Americans, a source close to the case told AFP.

“Therefore the case frightens local investigators, especially given the increased pace of assassinations targeting military and police officers in the east of the country,” said the source in the criminal investigations department.

The case has now been passed to a judge based in the capital.

Turki replaced Judge Salem Abdelati, who was appointed last year to head the investigation but never unveiled any formal findings.

The government official, who asked not to be identified, justified the switch, saying “investigations carried out by the appeals court in Benghazi were not advancing fast enough.”

Benghazi-based analyst and political science professor Khaled al-Marmimi said: “Investigators are afraid to keep probing the case because they are concerned extremists will kidnap them at any moment.

“The authorities are ignoring the presence of Islamist extremists in the region. They are keeping silent on the issue and have not engaged them in any dialogue.”

Libyan investigations are usually carried out by members of the state security apparatus and then referred to the judiciary authorities through the office of the prosecutor general.

“The investigations in this specific case are being carried out directly by the judiciary through a magistrate,” said Taha Baraa, spokesman for the prosecutor general, adding that his office was not involved.

“The authorities want to expedite the case so they do not face American interference in the questioning of subjects like in Tunisia.”

A Tunisian suspected of playing a role in the attack, Abdelbasset Ben Mbarek, refused to be interrogated by FBI agents in December, according to his lawyer, who slammed what he called US interference in the probe.

In Libya, another judiciary official said Libyan and US authorities are cooperating on the case.

“US investigators have visited Libya many times but they have no connection with those being interrogated. Their role is logistical only,” he said.

A US Senate report published in late December judged that the State Department had made a “grievous mistake” in refusing to shut down its mission Benghazi, despite the deteriorating security situation.

Senators recommended that intelligence agencies “deepen their focus in Libya, and beyond, on nascent violent Islamist extremist groups in the region that lack strong operational ties to core Al-Qaeda or its main affiliate groups.”

President Barack Obama admitted on December 30 that a probe into a deadly assault on a US consulate in Libya had uncovered a “huge problem” in security procedures at the mission.

Obama said all of the recommendations of a critical report into the State Department’s operation in Benghazi would be implemented, and said American agents were hunting down those responsible for the killings.

“With respect to who carried it out, that’s an ongoing investigation. The FBI has sent individuals to Libya repeatedly,” the president said in the interview with NBC’s Meet the Press.

“We have some very good leads, but this is not something that I’m going to be at liberty to talk about right now.”