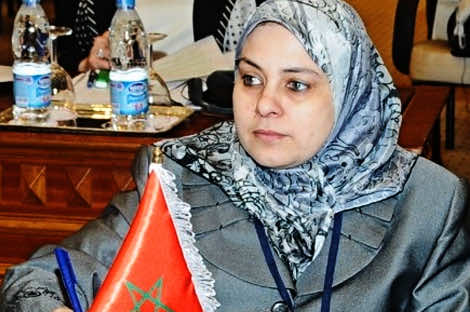 Media sources reported that Soumia Benkhaldoun, an engineer with a doctorate in computer systems, and one of six famous women of the Islamist “Justice and Development Party,” forced the operator of the express train coming from Kenitra to Casablanca, to stop in Skhirate station, 30 miles south of the capital.

Awakening from a nap, the Islamist MP found herself in Skhirate, having missed her stop in Rabat, where she was supposed to have gotten on. She didn’t blame herself for falling asleep and missing her destination. She rather ran to the operator and, having recourse to her political position, as an MP and member of the ruling party, forced him to stop the train at Skhirate station in order for her to be able, as she claimed, to attend the meeting with Mr. El Habib Elchoubani, the Minister for Relations with Parliament and civil society.

The traffic law is very clear in this matter. Forcing a rapid train to stop in a station that is not included in its schedule is considered a crime and the law severely punishes anyone interfered in obstructing traffic. But, as Noam Chomsky said, “For the powerful, crimes are those that others commit.”

The act of the MP sparked outrage among commuters, who expressed their disgruntlement about this unlawful action.

At a time when Morocco has launched a campaign in various forms, including media, to sensitize people of the dangers of corruption, and the need to build a nepotistic and discrimination free society, Mrs. Benkhaldoune seems to dance to a different tune. She made it obvious to Moroccans that there are still people who are above the law. As George Orwell in his fable, Animal Farm, sarcastically puts it, “All animals are equal, but some animals are more equal than others.”

After this embarrassing act, here again, we are compelled to call into question the credibility of the PJD, which boasts an interior democracy “never seen in other parties.” Being the head of both the PJD and the government, Mr. Abdelilah Benkirane is required to explain to the people whether this inconsiderate act executed by his “sister” in the party is excusable (under the pretext “Allah has forgiven what is past”) or that she must be held responsible for her deeds.

Through their populist discourse framed within the scope of well-chosen religious values, the PJD members claim that they came to power to moralize the political scene. They are denouncing elites as undemocratic and of a corrupt class when they proved to indulge in acts and practices that destroy rather than build a society based on democratic values.

Common people are fed up with such immoral scenes that transgress their rights and kill their belief in the state of law and equal rights. Frankly, this incident, among many others, gives us the impression that Moroccan officials are still removed from the principles of democracy. Once we learn to respect the law, and assume responsibility for our actions, then we can claim that we are on the right path and walking the first steps towards democracy.

As long as he head of the government, Mr. Benkirane will be on a quest for “Tamassih and L3afarit,” an expression he loves to use describing corrupt officials, not part of his party. However, true reform starts by cleansing one’s self, and “before you start pointing your fingers, make sure your hands are clean,” as Bob Marley wrote.