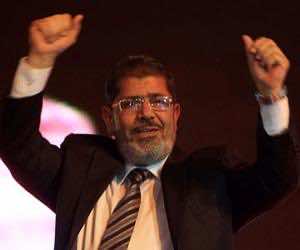 Egypt’s President Mohamed Morsi reshuffled his cabinet on Sunday amid a serious economic crisis and ahead of talks with the International Monetary Fund for a $4.8-billion loan, media reports said.

Hegazi, a specialist in Islamic finance, will report to Prime Minister Hisham Qandil, who remains in his post.

The Muslim Brotherhood, from which Islamist Morsi emanates, had criticised Said as being too close to the army, which held power during the transitional period after the overthrow of president Hosni Mubarak in 2011.

The ministers for transport, electricity, domestic development, civil aviation, the environment, communications, supply and domestic trade and parliamentary affairs were all replaced.

Morsi announced the reshuffle on December 26, after the ratification by popular vote of a controversial new constitution draft by an Islamist-dominated panel allied to the president.

He said he wanted a cabinet more suited to the economic crisis the country faces.

Egypt loan request to the IMF, made last August, was suspended for a month on December 11, with Cairo saying the postponement was “because of the political situation in the country.”

The IMF and Egyptian authorities had provisionally agreed on the 22-month loan — aimed at helping the government bridge financial shortfalls through fiscal 2013-2014 — on November 20.

A top IMF official will visit Egypt on Monday for talks that are likely to focus on the loan.