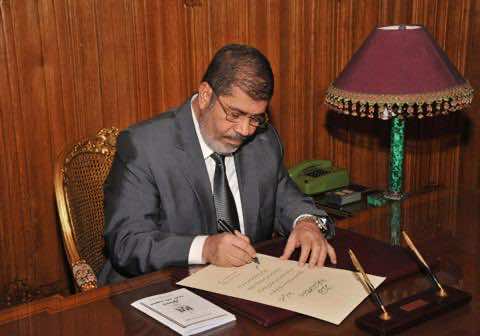 Egypt’s President Mohamed Morsi reshuffled his cabinet on Sunday, reports said, in the face of an economic crisis and ahead of fresh talks with the International Monetary Fund (IMF) for a S$4.8-billion loan.

Hegazi, a specialist in Islamic finance, will report to Prime Minister Hisham Qandil, who remains in his post.

The Muslim Brotherhood, which backed Morsi for the presidency, had criticised Said as being too close to the army, which held power during the transition after the overthrow of president Hosni Mubarak in 2011.

Ibrahim had been one of Gamal al-Din’s deputies in charge of prison administration.

The ministers for transport, electricity, domestic development, civil aviation, the environment, communications, supply and domestic trade, and parliamentary affairs were all replaced.

Morsi announced the reshuffle on December 26, after the ratification by popular vote of a controversial new constitution drafted by an Islamist-dominated panel allied to the president.

He said he wanted a cabinet more suited to the economic crisis the country faces.

Egypt’s loan request to the IMF, made last August, was suspended for a month on December 11, with Cairo saying the postponement was “because of the political situation in the country.”

The IMF and Egyptian authorities had reached a provisional agreement on November 20 on the 22-month loan — aimed at helping the government bridge financial shortfalls through fiscal 2013-2014.

A top IMF official will visit Cairo on Monday for fresh talks expected to focus on the loan.

The trip by Masood Ahmed, director of the IMF’s Middle East and Central Asia department, comes at the invitation of Egyptian authorities, the Washington-based lender said on Saturday.

Discussions will focus on “the most recent economic developments, their policy plans for addressing Egypt’s economic and financial challenges, and possible IMF support for Egypt in facing these challenges,” the Fund said.

Egypt is reported to have extensively used its foreign currency reserves to support the pound and to ensure vital imports such as wheat and fuel.

Egypt’s central bank acknowledged on Saturday that its foreign currency reserves, which fell to US$15 billion from US$36 billion in two years, were at a “critical minimum”.

The Egyptian economy has been facing serious economic repercussions from the upheaval since Mubarak’s overthrow in February 2011, particularly a decline in tourism receipts and a collapse in foreign investment

The Egyptian pound fell to its lowest level since 2004 of 6.42 against the dollar early last week before rallying slightly to 6.40.