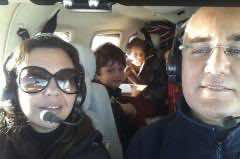 A French-Moroccan investigation has begun to determine the causes of the plane crash, on Saturday near Grenoble airport (south-eastern France), which killed CEO of leading Moroccan paint company “Colorado” Farid Berrada, his wife and three children, announced on Sunday French civil aviation authority for security investigations.

The Office of Investigations and Analysis (BEA) “has launched a security investigation following the crash of Piper PA 34 a few minutes after it took off from the airport of Grenoble on Saturday,” said a statement from BEA.

The Casablanca-bound aircraft, registered in Morocco and whose flight plan included a stopover in Spain, collided with hills south of the airfield,” the source recalled.

Berrada, aged 46, his wife, and his kids, a girl and two boys aged 6 to 16, were getting ready to leave for Morocco after a week spent in the region which is famous for its ski stations.