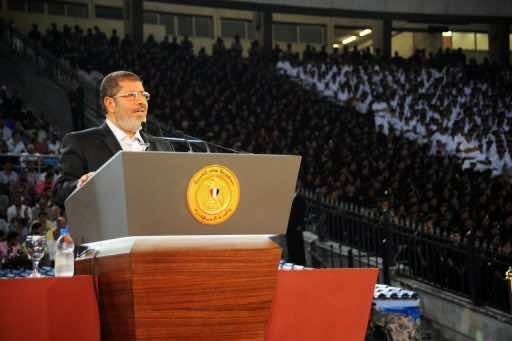 “The Syrian people, through their revolution, and through the movement will, when the bloodshed stops, move to a new stage where they will have an independent parliament and the government of their choosing,” Morsi said, according to excerpts released by the network.

“And then they will decide what they want to do against those who committed crimes against them. It is the Syrian people who decide.”

Morsi spoke through a translator after being asked if he believed Assad, the president of Syria, should be tried by the Netherlands-based International Criminal Court.

Over the past 21 months, the Assad regime’s crackdown on anti-government protests has ballooned into a bloody civil war that the United Nations says has claimed more than 60,000 lives.

Earlier Sunday, Assad offered a road map to end the conflict in a rare speech — his first in public in seven months — in which he branded the opposition “slaves” of the West and told foreign powers to stop backing the rebels.

In Washington, the US State Department described the road map as “detached from reality” and reiterated its call for Assad to resign. The European Union also called on him to step aside.