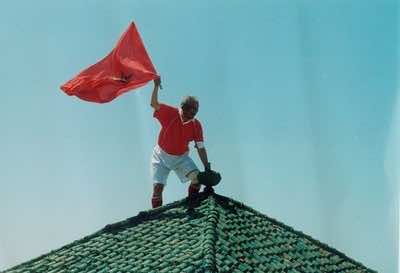 How good to live until you witness the real renaissance in your country and contribute to it with the most possible! How good to see that giant edifice being collaboratively constructed brick after brick on a solid foundation; the edifice that will shelter and unite us all and whose name is Morocco! How good to sweep this big edifice of all the revolting dirt and all the dust that made it look ugly despite its sublime beauty. How beautiful to see the dream we raised inside us for years steadily coming true!

The first spark of the Arab Spring brought along people’s aspirations and hopes to the fore. In some countries the wind of change turned to be a relentless tornado that toppled down deeply rooted dictatorships. In Morocco, which remains ‘the exception’ in the official discourse, it brought about a ‘peaceful change’ that many people consider a mere ‘cosmetic change.’ A new constitution, a new democratically elected government, a prime minister vested with considerable power, and a parliament with greater legislative power: Is this really enough to overcome the hurdles that have hitherto obstructed the way towards true democratic Morocco? Is this enough to live up to the long harbored expectations of the people? We will wait and see!

The title of this article is inspired by a huge film called “Wake up Morocco” by Narjis Najjar. The title, somehow, lured me to watch the film because of its political, ideological and emotional load. I thought before watching the film that the filmmaker will tackle the real factors for the revival and the renaissance of our beloved country, but to my astonishment it was utterly about football! I don’t deny the aesthetic value of the film and its very intricate overall technical construction for which I kindly bow and say “hats off!” However, I totally disagree with the idea that football is the savior that can bring us out of the darkness into the light! A true renaissance can never be achieved without knowledge and science. Full stop, back to the line.

If we take the example of the European Renaissance we will find that it built much on the Greek and Muslim scientific and philosophical heritage after its translation into European languages. Subsequently, the printing press was invented to be the turning point in the history of Europe and the world, then a huge army of artists, writers and thinkers, rationalists and philosophers, mathematicians and astronomers came to reshape the patterns of life in the West. The result, finally, was a multidimensional revolution –social, economic, scientific etc- followed by overseas explorations and expansions that only attest to the power of the West, for knowledge is power as Michel Foucault once said. The boundless ambitious mind of the West is still looking for other horizons and conquests far off in space.

The youth leading change nowadays in the Arab World should be aware of the huge responsibility they bear. The golden throats and the free pens should not tire until those in power stop the policy of brainwashing, indoctrination, assimilation, and the falsification of acts. The good citizen is not the one they want to cast in the mould of their media discourse; the good citizen is that who thinks, criticizes, analyzes, produces and finally sacrifices for the sake of his/her country.

Wake up Morocco, yes wake up! Wake up by effective national policies, responsible and knowledgeable youth, strong education system, democratic institutions, authenticity and modernity, and purposeful and professional media. Wake up Morocco, for “the great thing in the world is not so much where we stand, as in what direction we are moving” as Oliver Wendell Holmes said.