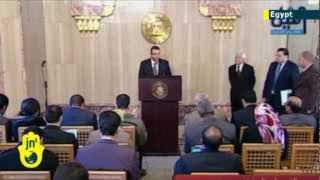 The ministries of transport, domestic development and supply went to members of the Brotherhood from which President Mohamed Morsi hails, reports said.

Eight of the 35 ministers led by Prime Minister Hisham Qandil come from the Islamist group which already holds the ministries of information and housing.

The new Finance Minister Al-Morsi al-Sayyed Hegazi, an academic specialising in Islamic finance, is also considered to be close to Brotherhood although he is not a member of the powerful organisation.

Ten new ministers joined the government in Sunday’s reshuffle which drew criticism in the media and among some parties.
“The Islamisation of the government”, wrote the independent daily Al-Shuruk.

The newspaper also quoted the head of the leftist Tagammu party, Rifaat al-Said, slamming the reshuffle and describing it as a “stranglehold” by the Brotherhood over the government.

The liberal Al-Wafd daily cast doubts over the government’s ability to deal with a difficult agenda within two months, or until legislative elections are due to take place in February or March.

Sunday’s reshuffle came on the eve of talks due to resume Monday in Cairo with the International Monetary Fund for a loan of $4.8 billion which many see as a key prerequisite for economic recovery.