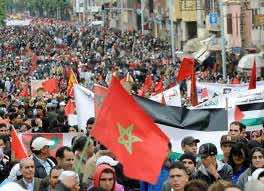 A video has been circulating on youtube and facebook urging Moroccans to protest in favor of “radical change” on January 13th. Uncertainty swirls around the call, as the creators of the video have neither introduced themselves nor their political or ideological background, but their facebook page has already reached over two thousands of followers.

Mounir Eljouri the secretary general of the youth of Al-Adl wal-Ihsan, an Islamist group, is reported by Alwatan Alaan to have said that such rally is expected to take place due to what he believed to be a crisis at the social, political and human rights levels. He noticed, however, that the current call for demonstration is characterized by uncertainty and differences among two Facebook pages with two distinct statements: the first demands “a democratic civic state” whereas the other calls for “radical change.”

The weekly newspaper interviewed Mohammed Allal Elfajri who apparently represents the pro- civic state demands. He refuted the other group on the ground that they are of “salafist” and “ extremist” affiliation. The weekly could not interview the pro-radical change representatives, but it reported they rejected Mr. Elfajri’s claims.

This call comes after two years of the emergence of February 20th movement. The movement lost momentum, especially after the withdrawal of Al-Adl wal-Ihsan and mainly and the constitutional reforms introduced by king Mohamed VI.

The ability of the virtual initiative to translate into reality remains uncertain, but what can be seen on the ground is that Morocco has already undergone some substantial changes and proceeded in providing the third way of dealing with the Arab Spring: introducing reform while preserving social peace and political stability.