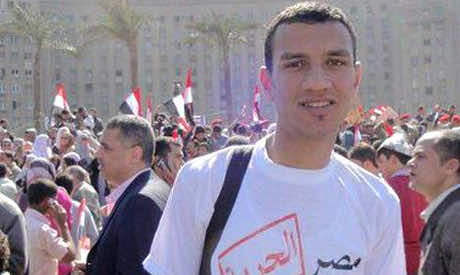 Advocacy group Amnesty International has called for the release of an Egyptian journalist facing military trial under a controversial law that allows the army to court-martial civilians.

The army arrested Mohamed Sabry, a freelance video journalist and an activist who opposed military trials, in the eastern Sinai peninsula while he was working on a story for the Reuters news agency, Amnesty International said.

Sabry, detained on Friday, has been charged with trespassing and filming in a military zone, the rights group said in a statement on Monday.

A new constitution approved in a referendum last month allows the military to try civilians suspected of “harming” the armed forces, a controversial clause that critics say can be used to stifle freedom of speech.

“It is particularly worrying that a journalist seems to be facing an unfair trial by military court simply for carrying out his work,” said Amnesty International’s Middle East deputy director Hassiba Hadj Sahraoui.

“The charges against Mohamed Sabry must be dropped immediately,” she said in the statement.

More than 12,000 civilians were tried by military courts during interim army rule between February 2011, when an uprising overthrew president Hosni Mubarak, and June 2012, when the ruling generals handed power to a new president, the group added.

The military has retained powers under the new constitution, reflecting its clout over decades in which every president emerged from its ranks before the election of Islamist President Mohammed Morsi in June.

Sabry was reporting on a new military decree imposing restrictions on land ownership in the Sinai Peninsula.

The peninsula, bordering Israel and Gaza, has become a haven for smugglers and Islamist militants who target security forces.