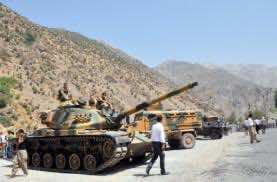 The Turkish army killed 14 rebels from the rebel Kurdistan Workers’ Party (PKK) during an operation near the Iraqi border that also left one soldier dead, an official statement said Tuesday.

“A crowded group of terrorists were engaged after they were spotted preparing an attack against a border post on January 7,” the governor’s office in the southeastern city of Hakkari said in a statement.

The group of rebels are believed to have infiltrated from northern Iraq, where the PKK has bases.

“The first findings suggest 14 terrorists were rendered ineffective,” it said, a term often used by Turkish authorities to refer to casualties among rebel ranks.

The statement added that a Turkish soldier was killed and two others injured during the shootout with the rebels.

The violence comes amid renewed hopes in Turkey that fresh talks with jailed PKK leader Abdullah Ocalan could result in a ceasefire and an end to the long-running Kurdish insurgency in the southeast.

Last year saw a surge in violence after a previous round of secret peace talks initiated in 2009 with the rebel leadership ended in failure.

The PKK is labelled as a terrorist organisation by Turkey and much of the international community.

About 45,000 people have been killed since the party took up arms for autonomy in Kurdish-majority southeastern Turkey in 1984.