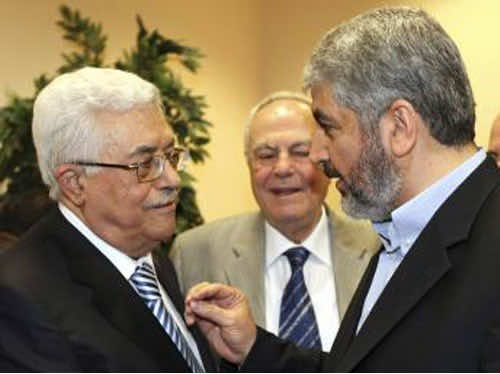 Morsi will first meet Abbas and then Meshaal before the two Palestinians meet with each other to discuss the implementation of a unity pact signed in 2011, the officials said.

An official at the presidency had on Tuesday said Morsi would hold a three-way meeting with the Palestinians, but clarified on Wednesday he would meet them separately.

Meshaal’s Hamas party and the Palestinian president Abbas’s Fatah have been at loggerheads since the Islamists seized control of Gaza in June 2007 following their victory in parliamentary elections the previous year.

Under Egyptian mediation, the two groups reached a unity agreement in April 2011, but the main provisions of that deal have so far not been implemented.

Fatah’s lead negotiator Azzam al-Ahmed told AFP that Abbas would discuss with Morsi his party’s relations with Egypt, which has boosted support for Gaza since the Islamist was elected president in June, and Arab support for Abbas in stalled peace talks with Israel.

Abbas and Meshaal will discuss “ways to revive efforts at reconciliation,” he said.

Meshaal and aides arrived in Cairo from Doha on Tuesday for a visit of several days, the official MENA news agency said.

Meshaal had met Abbas in Cairo last February, but there has little traction on ending the crippling divide between their movements.