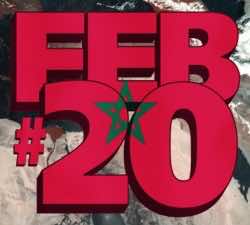 Five members of the “February 20” protest movement saw their sentences reduced on Wednesday to six months on appeal, after they were jailed for taking part in a non-authorised demonstration.

The five young men had variously been given prisons terms of between eight and 10 months in September on charges that also included attacking public officials in the course of duty.

While cutting their sentences, the appeals court in Casablanca also ordered them to pay 7,500 dirhams (around 700 euros) each in civil damages and fines.

A sixth female defendant, Laila Nassimi, had her suspended sentence reduced from six to three months.

The activists were arrested in July 2012 after taking part in a demonstration in a poor neighbourhood of Casablanca, Morocco’s economic capital, in which protesters chanted anti-monarchy slogans.

Clashes broke out when police tried to disperse the protesters.

Human Rights Watch had condemned the original trial process, citing claims by the defendants that they were tortured into signing false confessions, while the UN special rapporteur on torture last year criticised Morocco’s harsh treatment of protesters.

On Tuesday, members of the February 20 movement, which was formed in 2011 by youths demanding democratic reform and action on a range of social grievances, accused the police of adopting new repression tactics against fellow activists.

More than 50 of its members were jailed last year, according to local rights groups.

“The attitude of the police has changed from the direct repression of activists to threats of putting people out of work or arresting them for assaulting and insulting public employees,” said spokesman Mustafa Al Goumri.

He also claimed that the police were fabricating charges of drug dealing to imprison activists, referring in particular to the case of Driss Bouterrada, who was jailed for a year at the end of last month for possession and trafficking of drugs.

In October last year, a Moroccan court jailed another February 20 activist, Bashir Benshaib, for 12 years on charges that included blocking a road, theft, aggression, drug dealing and taking part in an unauthorised demonstration.