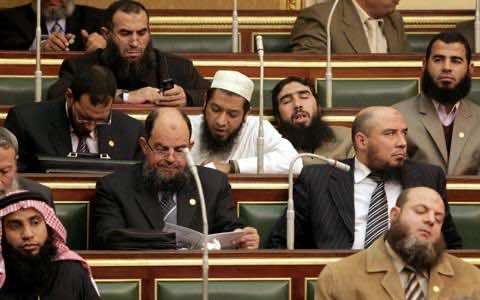 Egypt’s Islamist Nur party elected a new chief on Wednesday after a split within the powerful ultraconservative Salafi movement splintered the party ahead of parliamentary elections.

The party at a general assembly selected Yunis Makhyun, who was a member of parliament until a court annulled the Islamist-dominated house in June, in a vote shown live on television.

His party had won 112 seats in that parliament, in a surprise showing for a movement that had mostly eschewed politics before the overthrow of president Hosni Mubarak in February 2011.

The party’s former leader, Emad Abdel Ghaffour, resigned along with 150 members to form Al-Watan, a competing Salafi party ahead of fresh elections which are expected after February.

Egyptian press reported the split was caused by disagreements over the influence of powerful Salafi clerics in the Al-Dawaa al-Salafiya group, which had established the Nur party.

“We strive to implement Islamic law for Egypt’s sake and will work to purify all laws of anything that contradicts shariah,” Makhyun said in a speech after his election.

Makhyun has been reported in Egyptian press as denouncing as “usury” an IMF loan Egypt wants to boost its precarious economy. Usury is prohibited in Islam.

Makhyun sought to allay their concerns in his speech, pledging: “You will only see justice and affection from us.”

Salafis have been blamed for inflaming sectarian tensions in the country, which witnessed a spike of attacks on Copts over the past three years.