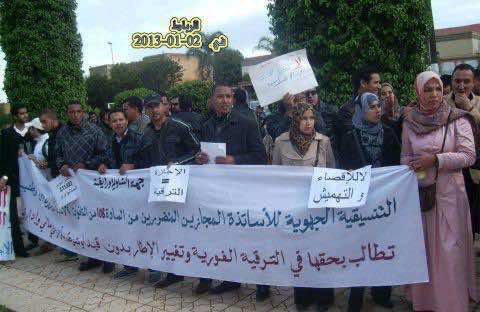 As is the case nationwide, the new teachers who have been appointed last December in Smara are angry with both the ministry and the minister of education.

They criticize severely the minister’s decision to deprive them from their right of being granted grade 10 status like other colleagues who will graduate from educational institutions to become teachers that were created by the ministry this year. 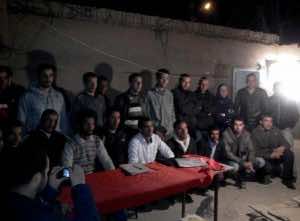 “We have got the same university degrees and did the same training and teaching the same programs for the same students. Why this discrimination and this social injustice?,” questioned Mr. Abdel Jalil, one of the teachers concerned with this problem.

In a meeting organized in a local teachers Union’s office to plan for their future protest, the committee that represents all the new teachers has described the ministry‘s decision,  “as unfair, unjust, unacceptable and unconstitutional.”

Some members of this committee told MWN that they are preparing to stage nationwide strikes during the second term. They didn’t want to boycott the first term exams and be blamed for the failure of poor marks on the regional first term exams that will take place next week in Moroccan school.

“This possibility may be taken in the second term if the ministry doesn’t respond positively to our just and legitimate rights”, they added in a special meeting with MWN.

New teachers are also feeling upset, disappointed, discontented and psychologically heat broken as they have not yet been paid their salaries.

They said that it is “not possible for a poor teacher who is appointed in the heart of the Sahara  or in a remote area and far away from his home and family to wait 6 and 7 months to get his/her salary”.

Mr. Rachid Hamsk, a teacher from Smara and member of the local committee that represents the city’s teachers, described this delay of salaries as “an absurd and meaningless” action from the part of the ministry that hurts teachers more than it motivates them.

Accordingly, Mr. Adel Majid  Meftahi added, “Teachers are living in bad conditions, in misery and could not pay for the rent of their houses and food while the ministers in Rabat are enjoying themselves without thinking about those teachers in remote areas like Smara.”

Another teacher summarized the feelings of the new teachers about not getting their salaries after nearly six months of work by saying, “we are angry and hungry at the same time.”

New teachers agree that not paying them their salaries in time and not integrating them in grade 10 are enough reasons that kill teachers’ motivation and readiness to participate positively as active partners in achieving the educational change Moroccans are seeking.