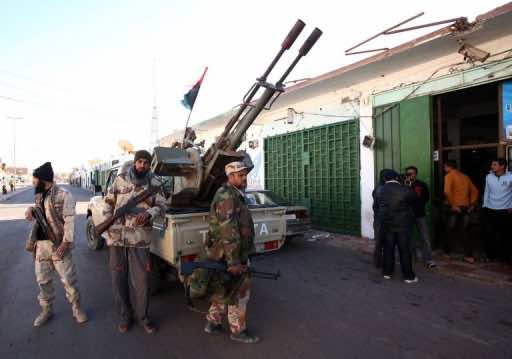 Four people were killed in clashes pitting Toubou tribesmen against a brigade linked to the Libyan army in the southern town of Kufra, a military official told AFP on Wednesday.

“Four Toubou tribesmen were killed on Tuesday in clashes against Shield Libya,” an army force made up of former rebels, the official said.

Shield Libya, he said, intervened “to prevent student casualties” after a skirmish between Toubou and Zwai tribesmen escalated into an armed confrontation inside Kufra university.

He said Kufra was now calm but tense.

Local authorities ordered that the university, which is in a Toubou area, shut for two days until order is restored, the same source added.

A tribal chief told AFP that Toubou elders were trying to “control their sons so there will be no acts of revenge after the incident.”

“We want the army to secure Kufra, and not a group of civilian revolutionaries who have no military principles,” he said.

Shield Libya, a force under the command of the chief of staff, is made up of rebels who learned to fight during the 2011 conflict that toppled dictator Moamer Kadhafi.

Tribal violence has taken a large toll on Kufra in the past year. Last June, 47 people were killed and more than 100 wounded in such clashes. Fighting in February had claimed claimed more than 130 lives and displaced half the population.

Kufra, a town of about 40,000 people, is located in a triangle where the borders of Egypt, Chad and Sudan meet.

The Toubou, who are dark-skinned and present in southeastern Libya as well as in Chad, Sudan and Niger, faced discrimination under the former regime. They also question the neutrality of forces deployed by the new authorities.

Libya’s national assembly in December ordered the closure of land borders with Chad, Niger, Sudan and Algeria, in a bid to boost security in the volatile oil-rich region.