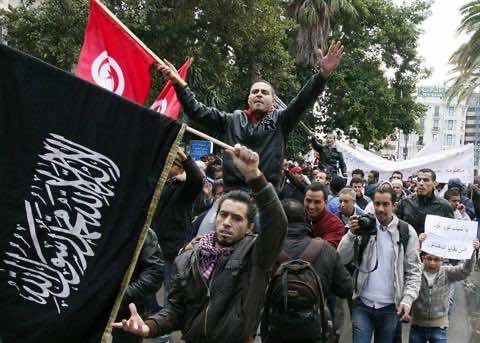 A Tunisian NGO that defends minorities and campaigns notably against homophobia and anti-semitism on Wednesday accused a controversial militia close to the ruling Islamists of attacking its office.

“Our offices were broken into and vandalised. We have just filed a complaint. We know very well who did that. It was the League for the Protection of the Revolution, which has threatened us several times,” said

Yamina Thabet, head of the Tunisian Association for the Defence of Minorities.

She said members of the League in the Tunis suburbs of Kram and Goulette had warned the NGO of reprisals after it organised a ceremony on December 29 to commemorate the deportation of Tunisian Jews during World War II.

“They accused us of being Zionists, and other things that I don’t dare repeat. They told us: ‘We will deal with you’,” Thabet told AFP.

She said Interior Minister Ali Layedh had promised “to take charge of the matter himself.”

The League for the Protection of the Revolution, a militia allied to the Ennahda party that heads the ruling coalition, has been implicated in acts of violence that have caused outrage in Tunisia.

It is accused of beating to death a representative of a secular opposition party in southern Tunisia last October and of attacking the headquarters of the country’s main labour union in the capital in December.

A number of political parties and NGOs have called for it to be banned.

The Tunisian Association for the Defence of Minorities is active in campaigning against anti-semitism and promoting the recognition of gay rights in Tunisia, where homosexuality is punishable by three years in prison.

Last month, the group lodged a complaint against an imam, accusing him of inciting hatred against Jews in a fiery sermon broadcast on television.