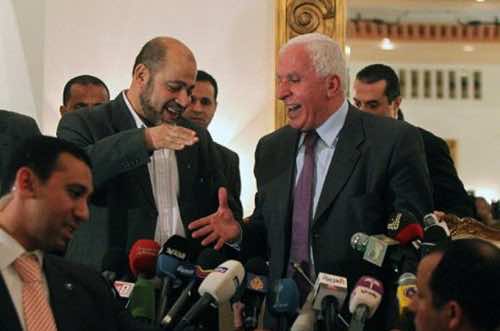 The decision came at a meeting in Cairo that was the first in almost a year between the West Bank’s Fatah leader Abbas and Meshaal, who heads the Hamas movement that rules the Gaza Strip, and was aimed at ending years of bitter and sometimes deadly rivalry.

“The two parties agreed to call on all Palestinian factions to implement the reconciliation agreement,” Hamas politburo member Izzat al-Rishq, who attended the gathering, told AFP.

It was held in a “very good and promising atmosphere,” he added.

Fatah and Hamas officials will meet soon to discuss further developments,
Rishq said, but did not give a date or more details.

On their visit to Cairo, Abbas and Meshaal also held separate talks with Morsi.

Meshaal and Abbas focused on implementing the Egypt-brokered April 2011 unity agreement aimed at ending years of infighting that was signed in May that year, but whose main provisions have yet to be put into practice.

The Palestinian national movements’ rivalry exploded into violence in June 2007 when Hamas forces seized control of Gaza a year after they won a landslide victory in parliamentary elections.

Meshaal met Abbas in Cairo in February 2012, but there has been little
progress towards ending the crippling divide between their movements.

In his meeting with Abbas, Morsi discussed Palestinian reconciliation, the Israeli blockade of Gaza and the financial woes of the West Bank-based Palestinian Authority, which Fatah dominates.

“Morsi promised to work towards lifting the Gaza blockade and helping Palestinians out of their financial crisis, lobbying donors and (our) Arab brothers,” Fatah’s lead negotiator Azzam al-Ahmed told AFP.

Egypt has boosted support for Gaza since Morsi was elected president in June.

Even before the Palestinian leaders met on Wednesday, there was no let-up in recriminations.

“Egypt’s invitation does not necessarily mean this meeting will lead to a serious start of implementing” the agreement, said Yousef Rizq, political adviser to Hamas’s prime minister in Gaza, Ismail Haniya.

“Abbas’s insistence on holding elections first affects the atmosphere of the meeting,” he said, stressing that all the provisions in the agreement should go into effect simultaneously.

But Ahmed said Abbas wanted the election committee to resume its work, “and after the committee ends its work, and there is a consensus government, then there will be elections.”

He said a senior Hamas official had told him the reconciliation deal should be implemented after the Islamist movement “reorders its house” — in an allusion to possible elections for a new leadership for the Islamist group.

Egyptian officials have said that a reconciliation deal that would allow Hamas representation in the umbrella Palestine Liberation Organisation, historically headed by Fatah, and the formation of a unity government, are opposed by Washington.

The United States, along with other Western countries and Israel, say Hamas must renounce violence and recognise Israel.

Hamas is officially sworn to Israel’s destruction but says it could accept a Palestinian state on the basis of the lines that existed before the 1967 Six-Day War when the Jewish state captured the West Bank, Gaza Strip and east Jerusalem.