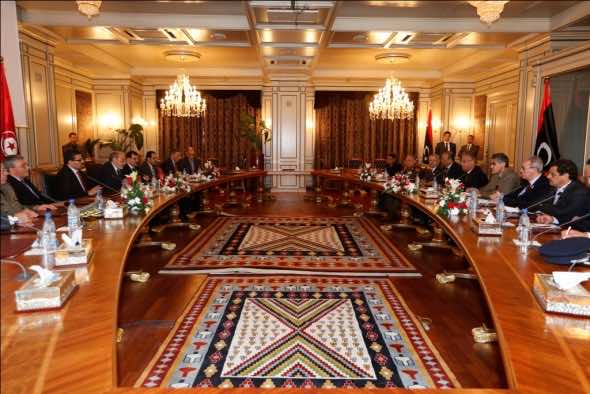 The premiers of Algeria, Libya and Tunisia are set to meet in the Libyan oasis of Ghadames on Saturday to discuss security along their common borders, a Libyan official said.

“A tripartite meeting between the prime ministers of Algeria, Libya and Tunisia will be held on Saturday in Ghadames to discuss border security,” the protocol official told AFP on Thursday.

Libyan Prime Minister Ali Zeidan said this week that the three countries will discuss “measures to secure their borders by fighting against the flow of arms and ammunition and other trafficking.”

On Monday, Zeidan hosted his Tunisian counterpart Hamadi Jebali for talks about border security and normalising traffic at the key land crossing of Ras al-Jdeir, which reopened on Thursday.

The Libyan authorities in December decided to close the country’s borders with Algeria, Niger, Chad and Sudan, decreeing the oil-rich south a military zone, in a move seen by analysts as a response to the crisis in Mali.

Mali does not share a border with Libya but it proved to be the worst affected by the spillover of weapons and fighters, both Tuareg and Islamist, that accompanied the 2011 uprising that overthrew Libyan dictator Moamer Kadhafi.

With West African governments now pushing for intervention to evict the jihadists from northern Mali, Libya and its neighbours, particularly Algeria, fear the fighters and weapons will stream back north across the Sahara.